MIDWIVES — George Street Playhouse at the New Brunswick Performing Arts Center, 11 Livingston Avenue, New Brunswick, 732-246-7717, www.georgestreetplayhouse.org, through February 16 — Working from the theory that stories find their best form, and that novelists are too married to narrative to be spare and dramatic, there’s risk in a writer

THE VERTICAL HOUR — Lantern Theater, in St. Stephen’s Church, 10th and Ludlow Streets, Philadelphia, 215-829-0395, www.lanterntheater.org, through February 16 — David Hare always provides a lot for theatergoers to consider. In “The Vertical Hour,” he delves into war, its coverage, option for a life different from one of action, and, of course, 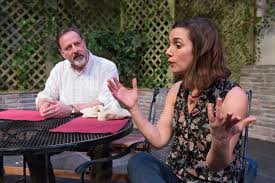 relationships. Being British, Hare approached his subject on a mature level and writes discussions that imbue his characters with intelligence, insight, and high sensibility. “The Vertical Hour,” a time when one must coolly confront a situation and stand to face it rather than regard it emotionally or avoid conflict by becoming romantic or sentimental, takes war, compatibility, and the talent for tolerance and forgiveness as his topics. Hare’s text gives one lots to consider as witty, informed, and articulate characters review their subjects, point and counterpoint, until all aspects are inspected and dissected. It’s fun to hear the glistening dialogue. Hare can be talky, but the talk is of a high order, so interest remains high. In the Lantern production, directed by Kathryn MacMillan, talk has to entertain because the characters seem to have no flesh on their bones or energy to move them. Hare’s sharp, engaging dialogue is there, but it’s delivered blandly as if having something interesting to say is enough, and nothing has to be established to animate or highlight Hare’s words. MacMillan and Lantern made the same error a few years back with Michael Frayn’s “Copenhagen.” Hearing about the female lead’s experiences in Iraq, where she corresponded about the war, the capture of Saddam Hussein, the retaliatory insurgence of forces favoring terrorists, and how it led to her having an unpopularly positive opinion of the need for some battle, should be reward enough. But Geneviève Perrier, an actress who has mustered great intensity, seems to breeze through her lines, reciting them without conviction and barely establishing a character that could attract a father, a son, and others she speak about while relating her experience. There’s no context in Perrier’s readings. “The Vertical Hour,” tough because it is so talky and calls for little movement or action, suffers for this. It doesn’t get a full hearing because two of its characters don’t seem to care if you listen. Joe Guzmàn creates an air of leisurely charm, but he doesn’t infuse his part of the dialogue, a bit more cynical, a lot more stoic, with any oomph either. MacMillan’s production falls flat and seems bland instead of bursting with intellectual fodder than should make you want to meet and have your own dinner with the speakers sowing it. It wastes any effervescence Hare provides. It allows the audience to tune out at time because the subject and not the presentation of the speeches take precedence. Marc LeVasseur, as a son reluctantly bringing his fiancée at her insistence to his urbane father’s quaint Shropshire country home, offers more spirit. He doesn’t have as much of pith to say, but LeVasseur’s character speaks for the simple and everyday, solid principles and habits that last. The only person he cannot be rational about, or around, is his father. Naturally, Hare creates triangular conflicts that come to head when he reveals how possessively the characters adhere to their ideas and practical execution of them. A full-blooded production of “The Vertical Hour,” with characters that exuded dimension and seemed drawn from life would be welcome. MacMillan’s uninspired staging lets Hare’s thoughts, arguments, and attitudes to be heard, but as they might be in a lecture and not as in a play. Ned Pryce and Sydney Banks do well as the correspondent’s students, Pryce having the most lively byplay with Perrier. One star of this Lantern production is set designer Meghan Jones who creates a delightful garden patio for the father’s villa. Shannon Zura helps by dousing the patio in gorgeous morning sunlight after she has bathed it in enticing, provocative moonlight.