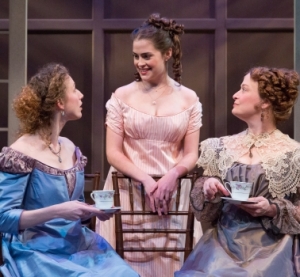 Joseph Hanreddy and J.R. Sullivan have proven with two productions they have a surefire bead on adapting Jane Austen novels for the stage.

As writers, they find the wit and bite in Austen. In both “Pride and Prejudice” and the current “Sense and Sensibility,” you hear the author’s voice through well-organized, though sometimes reorganized, storytelling. Hanreddy and Sullivan efficiently include every nuance of plot and personality while having their scripts work dramatically as theater. Austen couldn’t do it better.

For “Sense and Sensibility,” Hanreddy also directs, and he does so masterfully, allowing for period stylization that never becomes clichéd or mannered. The People’s Light production moves as if the characters are going about their lives and not as if they’re literary figures who require a kind of stiff reverence. Austen worked in reality. She skewered the haughty and the self-conscious of her time by noting subtle traits and tricks of language. Hanreddy’s cast captures that authenticity. You see it vividly in both Cassandra Bissell’s patient and touching reactions to unpleasant news as Elinor Dashwood  and Marcia Saunders’s effusively gregarious Mrs. Jennings.

Hanreddy’s production satisfies on literary and theatrical grounds. It is bright, smart, and clear throughout. Hanreddy introduces you to the milieu in several different localities, and to his credit, you can distinguish all of the country sites from the obvious scenes in London, not only by who lives there but in subtleties of manner and behavior. Once you meet Saunders’s Mrs. Jennings and Mark Lazar’s friendly and generous Sir John Middleton, you wonder how anyone would want to leave their company for anywhere else.

It goes back to authenticity. Saunders and Lazar play definite types, but both actors make you see their abundance of spirit and happiness at having people around them more than just fulfilling the role Austen gives them in the lives of the Dashwoods, a mother and two daughters — The third and youngest has been eliminated from Hanreddy and Sullivan’s script. — who are displaced by complicated British inheritance law and must leave their traditional estate in Sussex for a modest cottage on Middleton’s property in Devonshire.

The conflicts and complexities in Austen’s plot play delightfully in Hanreddy’s staging. This is Austen, and there are two marriageable Dashwood girls, age 19 and 17, so you know there will be a lot of romantic intrigue, especially as each Miss Dashwood settles on a particular beau that doesn’t requite her without causing some anxiety. There’s also much about the social strata of pre-Victorian England and the amount of land and income that will allow individuals to be comfortable or live to a level that suits them. Especially when that level, in the cases of John Willoughby and Lucy Steele, threatens to be beneath the splendor and pomp with which they prefer to live. Hanreddy involves you in every person’s tale while letting you see foibles and qualities that set one character’s sense and sensibility apart from another’s.

Hanreddy’s production has, to borrow from Austen’s title, the sensibility of Emma Thompson’s screenplay and Ang Lee’s direction from the excellent 1995 movie in which Thompson played Elinor (and Kate Winslet drew her first attention as Marianne). That is meant as a compliment. Hanreddy did not imitate Thompson or Lee, but he showed discriminant taste in choosing how far to go with a scene and personality. Nothing ever seems stingy, stagy, or overembellished in this show. It is elegantly paced, appeals to one’s intelligence, and entertains as much as it charms.

Saunders and Lazar get attention for the ebullience of their performances. Cassandra Bissell’s remarkable Elinor Dashwood, the elder of the sisters, sets the tone.

Though age 19, Elinor is not the childlike teenager of today. She is a women of great poise and responsibility. Though able to joke and take a joke, Bissell’s Elinor knows her boundaries and has the control and the strength to acknowledge them. She holds her emotions is check and accepts situations for what they are without gilding, underestimating, or romanticizing them. It is Elinor, and not her mother, the widowed Mrs. Dashwood, who serves as the head of her household when her father dies, and the Dashwoods must surrender their estate to Mr. Dashwood’s son from another marriage, one who is not inclined to be overly fraternal to Elinor or their sister, Marianne. Especially if his wife can help it.

From her posture to her serious exterior and talent for taking disappointments without betraying her feelings, Bissell’s Elinor exudes the intelligence, common sense, and propriety with which Austen endowed her character. She is Shavian before her time. Elinor is a rock of a person who, with her calm demeanor, is capable of incredible empathy. She also copes well with hurt in ways she doesn’t show, such as when Lucy Steele reveals her association with Edward Ferrars and a Dashwood servant reports Lucy is Mrs. Ferrars. Bissell’s performance is elevated by the small quiver of a lip, the prolonged, pensive stare, or other small indication of a large wrong done to her. She lets you, the audience, know of Elinor’s injury while masking it from her guest or conversation partner, at times the one that causes the wound.

Elinor withholds a lot, but Bissell finds a shrewd way of expressing Elinor’s thoughts and feelings. She is modern and conventional at the same time. There’s great humanity and life in her portrayal even when Elinor is being quiet, modest, deliberately unresponsive, or strategically polite.

Claire Inie-Richards, as Marianne, shows us what Elinor might be like if she indulged her temper and whims more often. Inie-Richards’s Marianne displays the breeding Elinor has but not the discipline. Elinor will keep a romantic fancy to herself until she’s sure of it. Marianne will wax romantic and make a show of her affections and desires. Just as you see Bissell fight to stymie impulse, you watch Inie-Richards give into it.

Inie-Richards is also adroit at showing the depth and humility Marianne acquires during her near-fatal fever, contracted by wandering too far afield in search of Willoughby’s estate when she realizes she is in its vicinity. It is this maturing and new level of consideration that makes sense of Marianne’s realization that Col. Brandon is a much better man and much better match than Willoughby, something her sister and mother always knew.

As much as I like how Bissell, Saunders, and Lazar portray their characters, my favorite performance in this production is Kevin Bergen’s as the usually easy to overlook Mr. Palmer, the mildly grumpy, always droll husband of Mrs. Jennings’s daughter, Charlotte, who tries Mr. Palmer’s patience and gives him reason to exercise his caustic wit by always nattering on about something trivial or gossipy. Bergen is excellent at casting a withering look just when the person irritating him won’t see it. He audience appreciates how he keeps peace by tactfully retreating to a corner with his newspaper after he’s wittily expressed his general disdain for most people and most situations. Bergen is also interesting as John Dashwood, the brother who inherits the Dashwood women’s home and evicts his stepmother and half-sisters. Bergen gives John some warmth and lets you see an internal tug of war that conveys John’s willingness to let his father’s second family stay on their property, and with a generous allowance, if only he didn’t fear his wife so much.

Teri Lamm is an evil gem as that wife. When she coos general niceties that don’t reflect what she really means, butter would melt in this woman’s mouth, but you can see the snobbery and concern for not being completely in charge in her perpetually imperious expression and mean sidelong glances at her husband’s kin. This is a woman who is used to property and ecstatic about getting a grand bit of her own. She will not let John be sentimental about a woman who is not his mother and sisters who do not have the same social status as she and her family, the Ferrarses. This Fanny Dashwood is meant to rule, and rule she will. Lamm shows that at every cunning step of her fine performance, and especially when she hears something that ends her evolving friendship with Lucy Steele. Lamm deftly changes mood and is frivolously merry and chatty in her second role as Mrs. Palmer. She and Bergen do well playing both couples, and their performances add to the texture of Hanreddy’s production.

Neil Brookshire is all bashful propriety as the noble Edward Ferrars, the older Ferrars brother generally accounted to be duller and more serious than his socially popular siblings, but actually indifferent to fashion and more interested in literature, history, and nature than in the doings of society or the gavotte. Like Lamm, you see Brookshire come out of Edward’s shell when he plays his younger, more playful, and less erudite brother, Robert.

Grant Goodman manages to endow Col. Brandon with personality that gives Marianne a cue to love him. Sam Ashdown is a dashing Willoughby that shows why he might be favored by ladies over the Ferrars brothers or Brandon. Karen Peakes, as Mrs, Middleton, shows there is some calm gracefulness amid the jocularity and raucousness of her husband and mother, Mrs. Jennings. Peakes is a fine partner to Olivia Mell as Lucy Steele’s sister, Anne.

Olivia Mell is wonderful and Lucy Steele, who is easier to excite than either Dashwood sister and can’t help being taken with gossip and social intrigue in a way that might briefly entertain but mostly appalls Elinor. Susan McKey lets you see where Elinor gets her poise and Marianne her enthusiasm as Mrs. Dashwood. Joe Guzman has a dramatic cameos as the dying elder Mr. Dashwood and the physician that tends to Marianne’s illness.

Linda Buchanan’s set neatly allows for rustic and refined settings and gives a sense of place even when you see only furniture. Marla Jurglanis’s costumes are perfect for the Regency characters.