All in the Timing — Idiopathic Ridculopathy Consortium at L’Etage 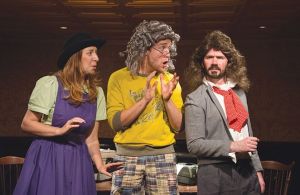 Tina Brock and David Stanger’s production of David Ives’s loopy one-acts, “All in the Timing” is an occasion of grand serendipity.

“Timing’s’ half-dozen sketches seem handmade for Brock’s Idiopathic Ridiculopathy Consortium, the actors from which, including Brock and Stanger, are proving what timing is all about and how it enhances comedy. While taking a broad approach, the IRC ensemble milks every ounce of humor from Ives’s comically bountiful and deliciously creative riffs. To a person, each cast member finds a way to give Ives’s treasure trove more bounce, more oomph, and more laughs than in the usual evening of entertainment. Stanger and Kristen Norine fluently and flawlessly have intelligible conversations in a nonsense language, Unamundo, that an inspired Ives invented for this skit. Andrew Carroll creates hilarity just by walking towards the stage as an immediately identifiable Leon Trotsky with a climber’s spike smashed in his bewigged skull.

Not an ice pick, as legend says and Trotsky dreamed. But an climber’s spike as a reference book that serves as the springboard for this sketch tells us.

Stanger and Carroll deftly sail through another Ives invention, “The Philadelphia,” a stroke of bad luck that comes over you suddenly and makes it impossible for anything to go right or logically in your life.

Several of Ives’s vignettes involves bells that ring to indicate a change in a character’s attitude and answers. For instance in “Sure Thing,” Brock and Bob Schmidt, are two singles who meet in a café that is designed more for lounging with a book than for just sipping and leaving. Schmidt’s character begins the gambit by asking Brock’s if he can share her table, which has an empty seat. She says no in several ways and yes in several more, a bell, like the kind on a hotel registrar’s desk, indicating the variation. All kinds of combinations and permutations emerge as Brock’s Betty and Schmidt’s Bill, thwart and embrace each other in turn. The actors are ripe for the challenge of this particular Ives exercise in timing. They neither rush nor delay their responses. They are always sharply on cue and cunningly hilarious.

The wonderful part of Ives’s sketches is they go beyond being vehicles with a gimmick and reveal the agile mind and ample imagination of this writer. Ives takes the familiar and skews it. Everybody’s heard about Trotsky and the ice pick, but Ives, motivated by an encyclopedia entry mentioning the climber’s spike, makes a great comic romp of the difference in weapons and goes further by having Trotsky, his wife, and his assassin discussing all the parameters of the murder and the choice of the spike. (The assassin tells us he looked for an ice pick to be true to legend but couldn’t find one.) All of these rollicking exchanges end with Carroll falling dead on Trotsky’s desk from the assassin’s fatal blow.

In another sketch, Ives lampoons the commonly stated example of probability that says a group of monkeys, left alone in a room with typewriters, will eventually write “Hamlet.” Ives names the chimps in his “Words, Words, Words,” Swift, Kafka, and Milton. It begins by Stanger’s Milton looking at his typewriter and reading a famous passage from Milton’s “Paradise Lost.” This Milton, Carroll’s Swift, and Jennifer MacMillan’s Kafka are intellectuals who discuss who this Hamlet might be and how they’re supposed “Hamlet” if no one tells them what they expect. In a great flight of comic irony, Carroll conversationally quotes Shakespeare’s “Hamlet” while discussing the unfairness of the assignment or the oppression of the keepers who monitor its progress. His recitation of the “insolence of office” and “proud man’s contumely” from the “To Be or Not to Be” soliloquy is wonderful, spoken well as with meaning while making Swift’s point about the nonsense the authorities are inflicting on the chimps.

Ives’s skits are all double edged (if only double). Each is a parody of human foibles, swindles, beliefs, or behaviors that becomes compounded as characters in a sketch vie or strive for what they say they want. Each also spoofs some aspect of life, whether it be about dating or falling into funk (that Philadelphia again!)

Shakespeare and Trotsky are joined by composer Philip Glass in Ives’s satiric sights. Stanger, Carroll, MacMillan, and Norine go into a repetitive musical number while moving mechanically in an aural and physical send-up of Glass’s compositions.

The gags are non-stop, and so is the talent. IRC’s “All in the Timing” is truly a group effort in which all cast members play their parts to the hilt while feeding and responding brilliantly to the material before them. The cast is so good, they convince you they are average people, or chimps, going about their business among mayhem that, in Trotsky’s case, kills him.

Artistry is at work from the actors and the author. Even small parts on the fringes of skits have impact. Carroll’s sincerity as a new student who arrives for lessons just as Stanger’s instructor admits Unamundo is a fraud, enhances the already impressive exchange in which Stanger and Norine speak the so called “Universal Language” as if it was their patois of habit. Norine’s intent Ramon is hilarious as he, Trotsky’s murderer, shares moment of concern with Mr. and Mrs. Trotsky and explains calmly, and with only enough apology to be polite, why he committed his act, the dastardliness of which depends on your assessment of Leon Trotsky. Not a move is wasted, on the L’Etage stage or in Ives’s text. Everything in “All in the Timing” conspires to give you a good time.

I get a kick out of the way Ives’s mind works. I especially enjoy his naming periods of when everything goes wrong, when even in restaurants you have to order the opposite of what you want to get what you want, a Philadelphia. While I am proud of what entrepreneurs in the culinary and performing arts have managed to do in my hometown, I am consistently dismayed at the historical incompetence of Philadelphia’s political and civic leaders and often say, “If you want done wrong, or stupidly, ask a Philadelphian.” (Hey, I am about to vote for someone whose name I can’t remember for mayor because I loathe the career pol who has plagued City Council for 30 years and will be the eventual winner. It’s an Ivesian Philadelphia!)

Carroll and Stanger are especially good in the Philadelphia sketch. Stanger enters the scene in a “Los Angeles,” which means everything is laid back, cool, and copacetic. It’s Carroll who brings the Philadelphia cloud to the proceedings. Carroll’s a master at showing his character’s frustration of being in a perpetual Mercury retrograde, unable to accomplish or even explain to anyone what he wants or what he’s going through. Stanger’s “Angelino” understands and sympathizes. Until the “Philadelphia” becomes contagious.

Brock and Schmidt play a social chess of sorts to the timing of Ives’s bell. Every time the bell sounds, what could be in a nanosecond or in two minutes, Brock and Schmidt’s characters change their mind about something, usually becoming amenable after being contrary, withholding, or suspicious.

I admire the way Brock directed the “Words, Words, Words” scene, having the “chimps” take their cues more from their literary counterparts than from their status as apes. The intellectual side of the creatures emerges. You see them as think tank denizens who are working to solve this Hamlet conundrum. In their midst of their comic pondering, Brock or the actors throw in a subtle sign of apehood, such as Carroll nonchalantly wiping his backside with his fingers and flinging whatever he allegedly finds casually to the side.

Kristen Norine, who made an impression this spring in IRC’s “Misalliance,” is a truly deft comedian. She conveyed just the right mixture of commitment and matter-of-fact domesticity as Trotsky’s killer. Her character’s speed at picking up Unamundo is amazing, Both she and Stanger rate high admiration for their ability to sound so facile and thorough while speaking in Ives’s fictional tongue. It was as much fun listening to them spout gibberish as it must have been for Ives to create his language. The great things Unamundo contains enough context clues that we can follow what Norine and Stanger are saying no matter how arcane Unamundo gets.

Jennifer MacMillan is a wonderful sketch comedian. Her uncaring waitress, more interested in getting away from her customers than feeding them, can come from any of the ungracious spots in Atlantic City. Her reactions and curiosities as Trotsky’s wife were funny and entertaining.

Brock, Stanger, and their troupe could easily replace the current nuclear cast of NBC’s “Saturday Night Live.” They are that adroit at making Ives’s comedy come through with dividends. With Ives as their writer, they have infinitely better, much funnier material to work with.

Brock and Stanger keeps their production as simple as possible. There are no big effects, and big props like a blackboard and three portable typewriters are maneuvered nicely and seem natural. IRC shows that good theater is often a matter of sharp line reading, pinpoint execution, and keeping the material entertaining. They do all of the listed well, Ives’s shrewdly intelligent skits providing a headstart Andrew Carroll, Kristen Norine, David Stanger, Tina Brock, Bob Schmidt, and Jennifer MacMillan take to the winner’s circle.

One more hero needs to be cited, Mark Williams, who designed or built the props. Oh, and let’s not forget Erica Hoelscher’s witty costumes, especially in the Trotsky and “Hamlet” scenes.

“All in the Timing,” produced by the Idiopathic Ridiculopathy Consortium, through Saturday, November 7 at L’Etage (above Beau Monde creperie), 624 S. 6th Street, in Philadelphia. (Enter on Bainbridge Street. Showtimes are 7:30 p.m. Tuesday, Nov, 3, Wednesday, Nov. 4, and Saturday, Nov. 7. Tickets are $20 and can be obtained by visiting www.idiopathicridiculosityconsortium.org.