The Rape of Lucrece — Wilma and Philadelphia Artists’ Collective at Wilma

Great news!!! Dan Hodge’s exhilarating recitation of “The Rape of Lucrece” returns to the stage for four nights, April 21 to 24, at 8 p.m., at Philadelphia’s Wilma Theatre, Broad and Spruce Streets. What a wonderful bridge between the Wilma’s magnificent “Hamlet” (which continues through May 2 with the incomparable Zainab Jah) and its upcoming.” Rosencrantz and Guildenstern are Dead!” Hodge turns Shakespeare’s epic poem into The Bard’s 39th play. His reading is clear and exciting. Its revival is a treat of which all theatergoers and Shakespeare aficionados should take joyful advantage.Tickets can be obtained by calling 215-546-7824 or visit http://www.wilmatheater.org. 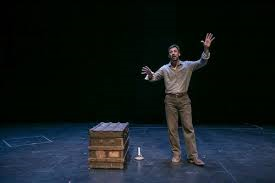 His stirringly moving recitation of Shakespeare’s poem, “The Rape of Lucrece” is a bona fide piece of theater that entitles Hodge to be numbered with Alec McCowen (“The Gospel According to St. Mark”), Fiona Shaw (portions of “Ulysses”), and Eileen Atkins (Virginia Woolf’s “A Room of One’s Own) as an adapter and presenter who made a complete and gripping drama from a work that was intended primarily as literature to be read and not acted.

Hodge treats Shakespeare’s poem as if it was a major speech by a character relating a complex episode describing a battle or an astute psychological observation, complete with quotes, vivid imagery, and the piercingly brilliant language so associated with The Bard.

Hodge measures his delivery, carefully making sure all of the exposition is clear and his audience knows the identities and relationships between the treacherous warrior, Tarquin, his alleged…