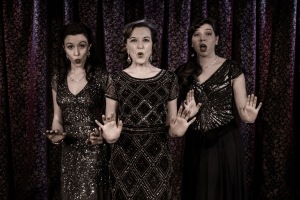 Enjoyment of the Mauckingbird Theatre Company’s revue, “Hot ‘N’ Cole” depends entirely on which performer sings which particular song and when.

All six of the performers in this program of Cole Porter songs have a moment or two to shine, but in general Luke Brahdt and Jenna Rogalski are more reliably consistent and serve Mr. Porter better than their castmates. Also one has to question the taste, especially in terms of the wit and sophistication, of some of arranger Bruce W. Coyle’s choices and director Brandon McShaffrey’s staging.

Mauckingbird’s “Hot ‘N’ Cole only satisfies particular number by particular number. As a whole, McShaffrey’s production doesn’t seem completely thought out has some segments that are amateurish, and not in a way you would call charming or precocious.

Luke Brahdt stands out because his voice always serves him, and he always seems able to find and convey the spirit in the tunes assigned to him. Other cast members have sporadic problems with key, pitch, sustaining, and projection. They all prove able on some level but look more often as if they’re just happy to be in a show and not cognizant — or possibly too self-conscious — about where their voices are going. Or aren’t going.

In listening to the singers, I thought they aimed at times for the operatic when performing Porter demands confidence in the legit range. A tendency to extend notes or give them too much color robbed some of Porter’s compositions of their energy, spirit, and wit.

The inconsistency made “Hot ‘N’ Cole” rough going, but amid the bumps and lurches, there were some excellent passages. It’s time to concentrate on those.

Jenna Rogalski is a singer-actress of great potential. Her performance in “Hot ‘N’ Cole’ matches the quality of Brahdt’s except for one thing that is correctible. Rogalski has to learn to “sing out, Louise.” Her phrasing and instinct for filling a song, going beyond its music and lyrics to turn it into a one-act play, is spot on, as is her knack for acting in synch with the spirit of the song. Her voice is true and expressive. Rogalski has a belt, but she needs to learn how to produce more voice when presenting a ballad or quieter number. When she has the chance to break free and unharness her diaphragm, as in “Just One of Those Things,” “Get Out of Town,” or “Why Can’t You Behave,” Rogalski is aces. When she has a quieter passage, her voice shrinks, and you wonder where the volume went.

Rogalski has some superior moments in duet. She shows her ability to articulate beautifully while countering Nicole Renna’s “Let’s Do It” with the fast-paced, tongue-twisting rhymes Porter sets for “Let’s Not Talk About Love” (sung famously by Danny Kaye and containing series such as  “astrology, mythology, geology, philology, pathology, psychology, electo-physiology, spermology, phrenology, I owe you an apology…”). Rogalski impresses mightily as she reels off Porter’s lyrics with wit and deftness that goes beyond memorization and rehearsed pace. Rogalski makes the sentiments Porter expresses sound as if she was spontaneously thinking of them. She also does a fine job pairing with Luke Brahdt on “It’s DeLovely.”

Nicole Renna has some stunning moments when she flows with the music and gets away from thinking about her voice. Her part of the “Let’s Do It” number comes off crisp, clean, and clever.

Renna certainly has to ability to take over a room. She has a cabaret performer’s ease. It’s getting her voice in control that is her issue. She needs to find a way to relax her vocals the same way she settles into a song when she isn’t overthinking it.

While Brahdt and Rogalski earn the biggest bouquets, Renna has “Hot ‘N’ Cole’s” most triumphant success with her delivery of “Tale of the Oyster,” a Porter exercise in storytelling.

The proof of Renna’s sleight of hand with this number is I enjoyed it thoroughly, and I loathe “Tale of the Oyster” with such a visceral passion, I become nauseated upon hearing its introductory chords. Only the overrated and equally jokey “Miss Otis Regrets” causes more dread. Some songs, you know, should only be heard once, and from Ella Fitzgerald, and never done in your presence again. “Tale of the Oyster” and “Miss Otis Regrets” are two of those songs. Once you heard ’em, you’ve experienced everything they have to offer. Performers should warn when they are about to sing them and give you 30 seconds to leave the room (and 15 to re-enter after they have tittled the uninitiated who will be bored to tears when next they hear these unjustifiably lauded numbers).

Renna made “Tale of the Oyster” the compact work of art Porter meant it to be. Her tempo and lightness of touch while relating the oyster’s trek from Oyster Bay and back again, was just right to make the song palatable and even delightful. Rather than cringing, and singing “Agony, Misery, Woe!” from “Into the Woods” in my head the way I did when Philip Anthony Wilson preceded “Tale” with “Miss Otis Regrets” (uptempo, big mistake, not Wilson’s), I raptly listened and found myself enchanted by Renna’s delivery of Number Two on my Nemesis Song list. Renna found the right tone, a gentle one, and the right voice to defeat my prejudice and do Porter proud. She was so good, I didn’t miss Steve Ross or Ella.

I believe that when Renna goes off track, using an artificially higher pitched register, it’s because she’s thinking more about what she’s doing than the song. When she lets herself go and follows the flow of Porter’s music, she’s more successful and, at times, wonderfully successful.

Luke Brahdt was always influenced most by Porter, musically and lyrically. He and Rogalski seemed to best understand the composer’s intentions and use them to color their songs.

Brahdt has a versatile voice that works well in solos, duets, and ensemble pieces. He never threw off a harmony or dragged a note until it lost all of its tone. He endowed his numbers with attitude and panache. In addition to singing well, Brahdt knew how to entertain, how to use body language and facial expression to enhance a number and turn a song into a performance piece. He brought personality and charm to “I’m a Gigolo” and the proper playfulness and wit to “My Heart Belongs the Daddy.”

Rogalski is also a good actress. The looks on her face and way of backing from a situation lend a comic touch to her character’s response as Renna sings “Let’s Do It.”

John McCarthy has all of the ability he needs to be a strong performer. His voice can be quite pretty. He pays attention to the gist of a song. He has matinee idol handsomeness.

McCarthy only needs to get control of his voice and to keep it in tone. Although he worked hard to dress up his numbers, they became dull because McCarthy lost track of his breathing, therefore ending sustained or emphatic notes with an unmusical buzz-like sound, and he overthought some of his vocal colorings and stage business. You can sense McCarthy considering ways to wow us with his presentation.

The effect is the opposite. McCarthy appears to be straining to please and looking to dazzle by making movements or moues that show he gets, or wants to help you get, a joke when the best course would be to stay as natural as possible and let the work Porter already did have its sway.

McCarthy is trained for the opera, and you could hear that in his voice. On the positive side, you sense a richness of sound. On the negative side, McCarthy didn’t know when to turn off and operatic tones and head for the grittier legit sound. Michelle Eugene had the same problem. Her musical credits all center around Broadway shows, but she overreached her voice in many numbers that, again, would have benefited from a quicker, more natural pace and sound.

Overthinking and oversinging is the case every time McShaffrey’s production goes awry. Some numbers just plain backfire. An ensemble rendition of “in the Still of the Night” is a total trainwreck — slow, dull, and so lacking in harmony, the choral equivalent of a vacuum cleaner. It has no tone or beauty.

Tempi are an issue. Philip Anthony Wilson’s bouncy take on “Miss Otis Regrets” makes this fragile, one-joke song even more cloying than usual. The glacial pace of “In the Still of the Night” is as much a problem as the failure of the sextets’ voices to mesh. A long sequence that includes “All Through the Night” and “Night and Day” has the same problem. Bruce W. Coyle is listed as the arranger, but if I was Brandon McShaffrey, I would have overruled Coyle and charted the music as I saw fit.

Wilson is another singer who has obvious gifts. His tenor voice is sweet and clear, and he does well in harmony. He is also another who has to learn how to use his voice and control it. Wilson was the opposite of McCarthy and Eugene. He did the minimum while they overdid.

Because of its unevenness, “Hot ‘N’ Cole” becomes a mixed bag. Taken as a whole, the production wears out its welcome. Individual numbers fare better. There are islands of excellence within the rocky landscape (Renna’s “Oyster,” Rogalski’s comic takes). There are also the songs of Cole Porter, which can be their own reward, and a glimpse of talent that needs only to be refined or harnessed to accomplish a staging of “Hot ‘N’ Cole” that might be as classy as its material.

I fear I put the brunt of criticism on John McCarthy, who doesn’t deserve the weight of “Hot ‘N’ Cole’s” failures. I hope to be constructive and point out why some of McCarthy’s numbers didn’t work. His voice and general presence is good enough that I want to encourage him to work on the full sound of his voice, distinguishing the round tones of opera from the speedier rhythms of the American songbook, and to trust his material. I actually look forward to seeing him in another show and watching how his talent develops.

As for Luke Brahdt, I now, more than ever, would like to see a local production of “Carnival” because the region has a newcomer who could do well as Paul (although I certainly have no objection to someone giving the part to Ben Dibble, Jeffrey Coon, Dave Jadico, or Patrick Ludt. I already have Fran Prisco and either Ann Crumb or Denise Whelan cast as Marco and Rosalie, with Rob McClure as Jacquot and Elisa Matthews is Lili).

Enough of fantasy! Think of it as insight on what a critic does when he tunes out of one Cole Porter number while hoping the next will be one to watch.

Mary Anne Chiment was wise to dress the men in tuxedos and the women in gowns, showing the formality and chic of the era when Porter wrote, and  the crowds at El Morocco punished the parquet. Hana J. Cai and David Jenkins do a fine job accompanying the ensemble.

“Hot ‘N’ Cole,” produced by Mauckingbird Theatre Company, runs through Sunday, February 1, at the Skybox of the Adrienne, 2030 Sansom Street, in Philadelphia. Showtimes are 7:30 p.m. Thursday through Saturday and 2 and 7 p.m. Sunday. Tickets are $25, with discounts available for seniors and students, and can be obtained by calling 215-923-8909 or by visiting www.mauckingbird.org.