Letters to Zora: In Her Own Words — Crossroads Theatre 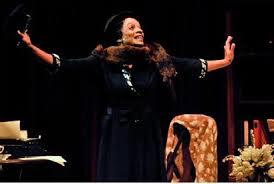 During my freshman year of college, I read a Langston Hughes poem, and it acquainted me with the Harlem Renaissance and the work of several writers, including Zora Neale Hurston.

I have always been amused by word and number combinations. Being named Neal Zoren, anyone, let alone an author so prolific and profound, with a name so similar to mine as Zora Neale Hurston would be a fascination, this one rewarded by hours of pleasurable and enlightening reading. Up until finding Zora, I was impressed that my name was one letter away from being a perfect anagram for Lena Horne’s. Now I had a new artist with whom to have a nerd’s perception of numerological kinship.

As silly as all of this may sound, it had the advantage of making me a fan of two remarkable women, one of whom, Horne, I would have the chance to meet, and another, Zora, who I always call by her first name, who entertained me for decades.

Zora continues to entertain, enlighten, and impart seminal wisdom in a solo show, “Letters from Zora: In Her Own Words,” for which the meticulous and poetic Gabrielle Denise Pina, a novelist in her own right, collected Zora’s massive correspondence and crafted it into a monologue delivered at New Brunswick’s Crossroads Theatre with wit, sincerity, and majesty by Vanessa Bell Calloway.

Calloway’s feat of memory is stunning enough. In more than 100  minutes, without a chance to pause, let alone to stop for an intermission, the actress never stumbled, missed a cue for transition, or failed to articulate the genius, both as a writer, and as a woman determined to live independently according to her own principles, of Zora Neale Hurston.

Calloway’s performance is enchanting. Besides being fluid and heartfelt, it reminds us, thanks to Pina’s excellent editing and composition, how extraordinary and how pioneering Zora was.

Everything Zora for stood and fervently believed is revealed in Pina’s text, and Calloway magically embodies the grit and strongmindedness of Zora along with her femininity, abundant sense of humor, and disdain for anything false or condescending.

Yes, the words as Pina’s title tells us plainly, are Zora’s, but Pina is the one who had to take a volume of letters and make them into one cohesive, listenable work. She deserves great credit for accomplishing that.

Calloway earns unending praise for presenting a monumental amount of information in a conversational way.

The greatness of Pina’s script is it plays as if someone is talking instead of writing. Zora’s words take on immediate oral depth. Calloway’s art is in making this avalanche of philosophy and biography into something immediate while being captivating enough to hold an audience’s attention for an extended period.

She plies that art without showing effort or strain. Calloway’s presentation is an easy and as natural as Pina’s text. The actress literally talks to you about various ideas and reactions, and you not only want to attend, you want to hear more.

Zora Neale Hurston wrote about and practiced individuality and independence before it was fashionable.

She did not limit her attitudes and ideas to women and blacks, even though she was aware of how those traits affected her and others. Zora’s almost ferocious stance for self-determination went beyond any specific gender or race. She wrote about personal freedom like Thomas Jefferson did, as an inalienable right. Her perception of the world extended to all humanity.

In her time, even at the height of her influence, Zora would be criticized for her use of dialect in depicting Southern black characters and for not taking a stance on specific civil rights pertaining to black people in America.

To my mind, she did better than that. What she wrote in her books, and in the letters Pina and Calloway now so entertainingly bring to our attention, advocated that all people would do best to forget traits others would use to define and categorize them and live your life according to what suits you.

In Zora’s fiction, and in her life, decisions were not always perfect. Ineluctably human factors, such as sexual attraction, selfishness, a desire to hurt back, and conditions that don’t quite let you be your best and most motivated self, impinge on life and how one lives it. Zora acknowledges such shortcomings, impulses, temptations, and failings, and that’s what makes her work so vibrant.

People, in life, go against the wisdom they have, sometimes to create deeper wisdom, sometimes forgetting their way in a manner that forces them to recover what they know and believe. Wisdom and self-preservation always come back to being the pervading factors. One can do as one likes, but one must be prepared to accept consequences. One should do what one likes because most of the consequences are gossip and other people babbling as if they know better. Zora saw both of these truths as being self-evident, but she forged ahead to create life, and literature, on her own terms, blind or dismissive to those who would insist on rules or impose a status quo.

You hear this independence and individuality throughout her letters, just as you read it within and between the lines of everything Zora writes.

The remarkable thing is, under pressure, Zora holds her ground. She will not judge life, especially her life, by the pinched moral standards of the time. Neither relationships nor happiness was found that way. She also would not knuckle under to the political correctness that colleagues, such as Richard Wright, who always disparaged Zora and her writing, would try to dictate.

On the page, and on life’s stage, Zora Neale Hurston called the shots and established the rules. Her moral code might be different from the standards of her time, but it was more consistent and more sincerely practiced than those of hypocrites and sycophants.

Pina finds all of this determination to live and write freely according to one’s own conscience, and Calloway conveys it while tempering this fierce side of Zora with humor and a penchant for shrugging off other people’s thought when they didn’t suit or when Zora just did not agree with her critics or detractors.

Zora navigates the world as she sees it and finds it. She lets her native wit sort out right or wrong, good and bad, fun and folly. Sometimes she opts for the negative side of these yin-yang combinations, but she usually does so with a clear eye and a sense of adventure.

Men can hurt Zora, but until and unless one proves he is more, men are playthings. Zora wants to make her own living and spend what she earns as she pleases. Other writers, like Wright, can go so far as to denigrate both Zora’s stories and her character, but Zora will give Richard Wright all the attention she would give a gnat on her shoulder.

The law can impinge. Zora is accused and has to face trial on bogus charges of alleged child molestation her nemeses were careless enough to say happened at a time when Zora was verifiably in Honduras, but, difficult as this episode was, she would rally to an extent.

Zora saw people as indomitable if they would only let themselves be. She would be the first to tell you that living her attitude did not always make life easy. You can hear that in her letters. But Zora would persist in doing things in her own way. Wright, and even W.E.B. DuBois could hate her writing. Zora wrote her stories to suit a reading audience, and it is a tribute to her stubbornness that those stories hold up today.

Zora was not uninterested in the plight of women or black people. Her books tell you that clearly. They’re all about an individual conquering, or trying to conquer, conditions and expectations that occur because she is a woman and black. They delve into common beliefs and what the character learns that is truer or better than the ideas accepted and perpetuated by people with a herd mentality. They’re about emotional and traditional shackles women have to shake off if they want to be fulfilled. They’re about breaking rules, especially about fidelity, that fly in the face of logic or reality.

Zora Neale Hurston is a crusader who couches her cause in stories that include dialect and disdain for old-fashioned ways.

Others wanted her crusade to be more conventional. They wanted her to take more of a part in organized civil rights matters. They wanted her prose to be more classical, rather than grounded in the hardscrabble Florida town where she was raised. The irony there is few writers are as elegant or as poetic in their narratives as Zora Neale Hurston is simply by practicing her usual style.

Zora’s approach to independence for woman and black people was an individual as her approach to writing and storytelling. She did not have to join organizations or make this or that statement or participates in a specific movement.

Her life, good or bad, up or down, was an example of independence. She was black and a woman who earned her living from her craft. She saw, as soon as she arrived in New York, that the attitudes and ways of Florida were behind her. All Zora had to all was live as she thought best.

Sure, that includes indulgences, slow times, and romantic debacles, but they are happen by her volition on her terms, and she rides the cycle of existence to the next high point she can accomplish by her intelligence and her pen.

Zora Neale Hurston does not have to join anything, whether the great DuBois asks her to or not, because she proves her independence and equality every day.

All of this comes through in “Letters to Zora: In Her Own Words” Pina finds the spirit of her character while revealing occasional pangs of regret, moments of hurt, and unhappy repercussions that arise from Zora not being the person or symbol others want to be.

Pina stresses a woman who will not conform but who will lead in her own way, that way being with words that inspire other women, particularly black women, to stand on their own to create their individual way of seeing and of navigating through the world.

Calloway, in no way preaching, makes that message plain. She runs a wide gamut of emotions as Zora, but more than being emotional, Calloway conveys the reasonableness and sensibility of this amazing character.

In Calloway’s hands, you are virtually spending an evening with Zora. That evening is as complete and engrossing as Pina’s subject herself.

Anita Dashiell-Sparks is a fine mirror for Calloway. The director finds nuances that keep her production going smoothly and that gives the steady flow enough levels to make it feel like a play rather than a recitation or lecture.

Manuel Prieto keeps the set simple, although you do see the typewriter and work space where Zora produced her novels and the letters that make up Pina’s text. Mylette Nova dresses Calloway in a manner that shows Zora’s sophistication. Phil Kong’s lighting design helps to create atmosphere and moods.

“Letters to Zora: In Her Own Words” runs through Sunday, October 26, at the Crossroads Theatre, 7 Livingston Avenue, in New Brunswick, N.J.  Showtimes are 8 p.m. Thursday through Saturday and 3 p.m. Saturday and Sunday. Tickets range from $55 to $35 and can be obtained by calling 732-545-8100 or by visiting www.crossroadstheatrecompany.org.