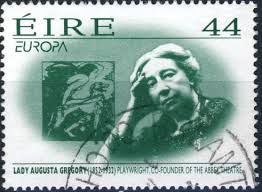 Lady Augusta Gregory is as seminal to classic Irish theater as anyone. She is among the artists and patrons who encourages Irish playwrights such as Sean O’Casey and John Millington Synge to create theater in Dublin and is a founder of that city’s fabled Abbey Theatre.

In spite of her importance, Lady Gregory is rarely produced. In 47 years of going to the theater more than 150 times per year, I had seen exactly one comedy by Lady Gregory, “Spreading the News,” at Canada’s Shaw Festival in the ’90s.

Last week, Philadelphia’s Irish Heritage Theatre tripled my experience and provided a lot of fun by presenting three of the playwright’s one-acts under the umbrella title, “A Night With Lady G.” Though some of the acting was uneven, the spirit of Lady Gregory’s work and the sharpness of her wit and knowledge of human nature showed through. In each case, a quick turn of events turns a simple situation into complex mayhem.

Lady Gregory enjoys irony and the dust that flies when the status quo is upset, even when the change is for the better. In “The Workhouse Ward,” two bitterly bickering roommates, who have known each other for their entire lives, and can’t stand the sight of the other, fall in league when someone tries to separate them. In “Spreading the News,” one man returning a hay fork to another who left it behind sparks a string of gossip that sets rumors of murder, adultery, and escape to America afoot, leading to an ending that’s as extraordinary as the “whisper down the lane” escalation of “the news.”  In “The Rising of the Moon,” the gentleness and fellowship of a man encountered on a seaside pier the police are patrolling, to apprehend an escaped convict, changes another man’s attitude and leads to a solution you might not have expected to support at the beginning of the play.

Lady Gregory likes surprises. She enjoys building her plots to a heady boil, then letting them simmer until they come to an unanticipated conclusion.

The journey she leads you on is grand and entertaining. Her characters are so ineluctably human, ready to change their minds on a dime or dig in their heels until their ankles get burnt by the Earth’s core. Except for one police magistrate in “Spreading the News,” they are simple people who can take the slightest misunderstanding or misinterpretation to hilarious comic extremes.

In the byplay between these characters, you’ll hear the Irish humor and rhythms of Irish speech that have entertained audiences in Hibernian music halls since the Great Culhane sought entertainment there. Neighbors toss blarney around at one another in ways that are unintentionally funny but that elicit laughs from us,

In “The Workhouse Ward,” two men named Mike, adversaries since boyhood, sit in wheelchairs, too infirm to attend a holiday celebration at the county charity home where they are consigned to live, and accuse each other of bygone aggression, such as setting one’s randy pig loose in a vegetable garden or of chucking apples at people’s heads. The men go at it, mentioning crime after crime one perpetrated against the other, always referring to each other by their full names  Mike Miskell or Mike McInerney, as most of Lady Gregory’s characters do.  In “Spreading the News,,” calumny behind a person’s back often belies what has been said to the same person’s face, but feelings and allegiances go awry when a woman who is hard of hearing mistakes one man’s calling after another to tell him he left behind his hay fork, a necessary tool of his trade, for the helpful man yelling at the forgetful farmer in anger and chasing him, brandishing the hay fork, to kill him so he can run away with his wife. Often, what people say about the episode is alarming rather than funny, but Lady Gregory weaves her dialogue so cleverly, you laugh at the benightedness of the people and their refusal to sit down and look at real evidence, as opposed to the rumored or the circumstantial which, frankly, is not a juicy.

“The Rising of the Moon” is the most delicate and atmospheric of the pieces, as one man, who has a duty and wants to stay true to it to keep his job and support his family, is lulled into the politics of the time, Ireland’s independence from Great Britain, and to considering more than his official position or his personal security.

Lady Gregory’s skills and the amazing entertainment value of her plays more than make up for the wide range of acting styles in the productions directed by John Gallagher and Peggy Mecham.

There is life in these scripts. Humor is rife, and humanity is exposed in all of its denseness, irony, and sweetness. Lady Gregory introduces you to towns and places where everyone knows everyone else’s business and takes gossip about neighbors to heart. She presents worlds in which no one has much, but all get by, seemingly happy and friendly, while underneath they envious, carping, and inclined to instigate. Only in “The Rising of the Moon” does nobility and a sense of camaraderie set a tone that overrides any cynicism or backbiting you might hear.

The Irish Heritage Theatre provides a good time, modest in presentation but grand in vitality, humor, and the intention to do good work.

Lady Gregory is well-served by this collection that, one hopes, creates a taste for seeing more of her work.

People being people, in all their frailty, is hard to depict, and Lady Gregory does it so well in what Gallagher and Mecham rightfully refer to as her “slices of Irish life” at the turn of the last century.

The great upheaval in “The Workhouse Ward” is the arrival of Mike McInerney’s recently widowed younger sister, who wants company in her comfortable home and farm in a pleasant country setting, and comes, handsome tweed suit and hat in tow, to take her brother from the charity ward and bring him to live with in relative ease with her. Mike Miskell immediately asks, “What, and leave me behind?” and Lady Gregory deftly handles the details from there.

The forgotten hay fork triggers the pandemonium in the uproarious “Spreading the News,” in which preposterous things are reported and believed, even as the supposedly dead man and his alleged assassin are standing in front of the people telling tales about them.

The change in attitude of both the characters and the audience in “The Rising of the Moon” is masterfully accomplished. In this skit, the final one of Irish Heritage’s evening,  the acting of John Cannon and Steve Gleich does enhance the adroit plotting of Lady Gregory. Their performances of diametrically opposed characters set a tone of openness and transition that has a satisfying effect and makes you root for the outcome Lady Gregory provides.

John Cannon and Steve Gulick have a fine time sparring, and one-upping each other in accusations of devilish wrongs past in “The Workhouse Ward.” Kate Danaher, as the nearly deaf apple seller who sets chaos in motion in “Spreading the News,” gives anchor to the production as she keeps escalating the story’s innate confusion by once more repeating something she’s misheard or misinterpreting something someone just said and giving answers and statements that add new layers to the tale of murder on the town fairgrounds. Emily Mattison is also fine as the accused murderer’s wife who, at first, tries to calm everyone down and bring logic to the situation but later, upon hearing of her mate’s possible motive, becomes as keen to catch the villain as anyone.

Gallagher and Mecham are simple but suggestive in designing their sets. You can feel the oppression of the workhouse and the chilly fog of the dock in “The Rising of the Moon,” that is also aided by Andrew Cowles’s lighting. Michelle Mercier’s costumes are well chosen, including her blankets for the pensioners in “The Workhouse Ward.”

There is artistry in sincerity and pleasure to be had from a venture done with the best of will and the finest of spirit. John Gallagher and Peg Mecham elicit that kind of sincerity from their company, abetted by veteran talents like John Cannon and Mary Pat Walsh.  Their production is lovely, clearly from the heart with an intention to entertain and introduce an overlooked artist to a grateful audience. It makes one want to see more activity from the Irish Heritage Theatre.

“A Night with Lady G.,” comprising “The Workhouse Ward,” “Spreading the News,” and “The Rising of the Moon” by Lady Augusta Gregory, is produced by the Irish Heritage Theatre and runs through Saturday, October 25 at Plays & Players, 1714 Delancey Street, in Philadelphia. Showtimes are 7 p.m. Wednesday through Saturday and 2 p.m. Sunday. General admission tickets are $25, with discounts for seniors and students, and can be obtained by calling 1-800-838-3006 or by visiting www.irishheritagetheatre.org.