The Charitable Sisterhood of the Second Trinity Victory Church — ActorsNET 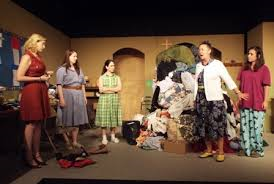 In Pennington Gap, Virginia,  the cognate to being in the Junior League or Jaycees is to be a member of a church’s charitable sisterhood.

These are select groups that don’t take membership lightly or approve it easily. A candidate must prove her mettle, which generally means impressing the bossiest biddy, usually the pastor’s wife, by at least pretending to be unquestioning and obedient, before receiving the pin or similar token that symbolizes acceptance.

Janet Murchison is in that probation stage. The woman she has to impress is the fairly formidable Bea Littleton, a leader who has never heard a good suggestion she didn’t immediately co-opt and pass off as her own.

Bo Wilson, in his play, “The Charitable Sisterhood of the Second Trinity Victory Church,” has two of his focal characters lose a good idea to Bea and has one of them predict Bea will offer a plan in the exact way it was presented to her, with the exception of a preamble Bea’s victim imitates as going something like, “Now, ladies, what we have to do about that is…”

Meanwhile, Janet is under Bea’s scrutiny, and the Pennington Gap doyenne is none too pleased that no one at the church has ever seen Janet’s husband or knows much about her except she’s rented a small house in town and alleges to have moved to Virginia from Americus, Georgia for business.

Janet’s identity will lead to a lot a detective work in Wilson’s amiable piece of fluff,  being given an amusing and realistic production by Bucks County’s  ActorsNET.

Wilson keeps things lively and suspenseful by adding some mystery to his look at ladies who get together to do good for humanity. He also seems to have a deep acquaintance with the women he’s placed in his play, as do director Joe Doyle and his knowing cast who don’t miss a beat in fleshing out their characters. Virginia Barrie is particularly spot on as Bea, a woman who lets nothing get past her and who brooks no disagreement or insubordination. At least not pleasantly.

Barrie’s Bea is always a lady, but you can tell she can be a bit of a hornet if she gets crossed.

On the afternoon “The Charitable Sisterhood” is set, Bea has called members to meet her in the church basement to sort out clothes, sundries, and household goods donated by church members as part of a relief effort to aid earthquake victims in Guatemala.

Attendance is low because while parts of Guatemala are flooded by erosion and tidal waves, Pennington Gap is experiencing a deluge of its own, in the form of driving rain that has made bridges invisible and threatens to cause great calamity in the town. Joining Bea are Sisterhood members who have personal reasons for wanting to pitch in to pack boxes for the Guatemalans. Lorraine will do almost anything to escape from her nine children who challenge decibel tolerance when they’re not demanding something for her, en masse. Tina is almost as new as Janet is to Second Trinity Victory and wants to garner Bea’s favor in hopes of being accepted as a Southerner by folks who discount her regional credentials because she was born and lived most of her life in “Yankee” Maryland and has no drawling accent. Janet comes mostly to instigate by heightening her neighbors’ scenario of intrigue concerning her.

Not  everything is as it looks in Wilson’s play. He has some plot twists, likeable ones, spoiler alerts forbid me to reveal but that put the words “charitable” and “sisterhood” into more precise context. The Trinity Victory women are right in suspecting Janet has not come forward about her purpose for being in their midst. A fifth character finds refuge from the storm by showing up in church’s basement. Bea shows a canny, indomitable side that can lead to several outcomes. Wilson gives the audience the chance to think about the best thing to do in what becomes a precarious situation and has us also wondering if Bea really should be in control of proceedings.

Virginia Barrie sets a tone for honesty and authenticity as Bea, one that spreads throughout Doyle’s funny yet touching production. From the moment she steps into that church basement, sheds her yellow rain slicker, and starts barking orders to Lorraine and Tina, you believe Barrie is the genteel but tough-minded arbiter of social standing in Pennington Gap. Of course, one of her first utterances is to repeat an idea of Lorraine’s by saying, “Now, ladies, what we have to do is this.”

Barrie’s character is more than in her lines. It’s in the actress’s walk, the bun gathered in the middle of her crown, the pitch and lilt of the voice, and in expressions that announce disdain, authority, exasperation, or approval with unmistakable clarity. Barrie embodies her character, and her complete approach filters down to her castmates and informs Doyle’s overall production.

Trust in the characters is what “Charitable Sisterhood” has going for it most. Barrie’s impeccable transformation into Bea makes you ride along when Wilson employs a writer’s trick or two.

Wilson is a good crafter of incidental patter. For most of the first act of “Charitable Sisterhood,” the woman are folding clothes, discussing what was in other congregant’s heads when they donated particular items, expressing curiosity about Janet, and worrying about the floods in both Virginia and Guatemala. Filling this time until one can set a plot in full motion is difficult for a writer. Long stretches with no real forward action can turn a play tedious in a hurry.

Wilson avoids that by making his characters funny. Vicky Czarnik, as Lorraine, can save the day with a story about one of her energetically rambunctious kiddies. Tina can make one claim to be a genuine Southerner, noted correctly that the Mason-Dixon line sits on Maryland’s northern border with Delaware and Pennsylvania, meaning the entire state is considered to be in the South.

Doyle keeps the pace brisk. The actress are natural and pointed in their dialogue. Barrie is just a hoot to behold, especially because Bea would never do or say anything that is intentionally funny. So “Charitable Sisterhood” goes along swimmingly even as you wonder if any specific matter or conflict is going to come to a head.

One does, a big one that involves a serious, potentially criminal, act and a conundrum the women must face in reacting to it.

Here Barrie once again steps to the fore as a leader and a force to be reckoned with. Bea takes a strong, unexpected stance that genuinely starts you thinking the course you’d take in her position. The question among the ladies sorting clothes with Bea is whether they will back her or opt for a more conventional way of bringing justice to bear in a case that might not be as clear-cut as it seems.

Once again, Wilson can be funny in the wake of a critical moral dilemma and absorbing mystery. As the characters discuss crimes they have either committed or considered committing, Bea, of all people, speaks up and admits she has often been tempted to give her husband, Second Trinity Victory’s pastor, a fatal kick when she sees him leaning over a deep well on their property.

The second act is a time of revelation, and each character says something that puts her personality in a different light, and not always a negative or diminished light.

“The Charitable Sisterhood of the Second Trinity Victory Church” is nowhere near a literary masterpiece but is a cannily crafted show that will consistently entertain you. ActorsNET gives Wilson’s piece a warm production, and the mystery is thought-provoking enough to make you think about Wilson’s play, and Doyle’s staging after you leave the theater.

The warmth comes from a spirit of camaraderie that transcends the script or the production. You see common sense and leadership in action, and they are traits rare enough today to be considered a commodity.

I don’t have to, but want to, repeat how wonderful Virginia Barrie is as Bea. She is a true anchor to the production, and I’m sure from the way she plays her character, she could walk into any church basement in the South, start folding clothes for a charitable cause, and not even be noticed as being unfamiliar or out of place.

Vicky Czarnik has the ready wit of the worn-out as Lorraine. You can read her weariness from non-stop responsibility, and refereeing, in her posture and walk.

Wilson gives Lorraine some wry remarks, and Czarnik earns laughs with every one of them. She has a knack for being off-hand and for making random comments about her raucous household as a kind of comic catharsis. Lorraine may be the least stylish of the Sisterhood, but she has the admirable sense to want more glamour in her life while never having to give up her baseball team of a family.

Allison Deratzian is a witty Tina, who seems better educated than her companions and has a priceless look for when someone says something that might be more than slightly inaccurate or incorrect. Deratzian’s Tina is the reasonable one in the group, the one who finds irony in her being a branded a Yankee and refutes the charge only to reveal she doesn’t care about the matter at all. One cavil: At the top of the play Tina has trouble opening a table I think would be easily in her range of competence. That sequence needs to find a more plausible core of reality.

Maryalice Rubins-Topoleski (say that eight times fast) looks fantastic, a cut above in style and personal conditioning, as the controversial Janet. Rubins-Topoleski has a fast transition to make, and she does it convincingly, sort of turning from Dixie Carter to Angie Dickinson on a dime.

Alexa Gutter is properly waifish and properly sympathetic as a young woman confronted by the Sisterhood even though her main objective in intruding upon their company is to get out of the rain and to avoid that washed-out bridge.

Joe Doyle keeps everything moving well and is deft at setting up the moments that turn “Charitable Sisterhood” from a frothy gabfest or a major forum on right and wrong.

Cheryl Doyle designed the set, a heap of clothes and gadgets so daunting, you’re glad there’s no audience participation for folding or sorting. Cheryl Doyle also procured most of the props, remaining disciplined about acquiring the ones Wilson mentions in his script, which include a Scooby Doo lunch box, a Bobby Goldboro vinyl LP, a vintage ham radio, a single water ski, a ceramic chicken lamp, and pants with a pony print. Bravo to Cheryl for such dedication and wit in presentation. Good luck to those Guatemalans who will find themselves so interestingly outfitted, and to Bea who keeps the chicken lamp for herself.

Cheryl Doyle also chose the costumes and found a perfect match for all of the characters’ personalities.

“The Charitable Sisterhood of the Second Trinity Victory Church” runs though Sunday, September 28 at ActorsNET, housed in the Heritage Center Theatre, 635 N. Delmorr Avenue  (the last street in Pennsylvania, overlooking Trenton, which figures into Wilson’s play), in Morrisville, Pa. Showtimes are 8  p.m. Friday and Saturday and 2 p.m. Sunday. Tickets are $20, with some available discounts, and can be obtained by calling 215-295-3694 or by visiting www.actorsnetbucks.org.