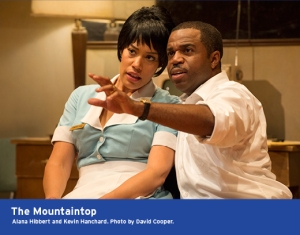 Katori Hall’s play, “The Mountaintop,” alas, is a recent of example of one my least favorite playwriting gimmicks, borrowing poignance by making a celebrity, literary, or historical figure the central subject of a piece.

In Hall’s case, the subject is Rev. Dr. Martin Luther King, Jr., depicted on the last night of his life in a Memphis motel room where he trades badinage and shares reflections with a chambermaid who answers his request to room service for a cup of coffee.

Conversation goes on amiably enough, and Hall is able to present King as a man who craves Pall Mall cigarettes, likes a relaxing drink, takes care to send his wife her favorite flowers, has a special relationship with his younger daughter, and feels disappointment when he doesn’t think he’s gotten the reception he’s expected  for a major speech.

Humanizing an icon like Dr. King is a good idea, and though the dialogue between the famous man and the hotel worker, Camae, does not exactly sizzle with wit or reveal much we don’t know, we’re willing to go along with it in hopes of a powerful payoff.

Camae comes and goes from King’s room a few times during the stormy Memphis night. Luckily, she smokes Pall Mall and is willing to share her pack with King until Ralph Abernathy, sent on an errand to purchase the cigarettes, returns. Also, she tends to be poised and natural around King. She doesn’t fawn or go into a fan’s rapture about his work,  fame, or historical standing.

In the course of his exchange with Camae, King has an attack of some kind, and Camae, attempting to revive him, calls him Michael, the name King was given at birth, before it was changed to Martin.

King, when he comes to, is dismayed that Camae called him Michael and demands to know how she knew to do it. The mild flirtations that looks as if they were leading to an invitation for an intimate night turn frosty as King displays genuine anger.

It is at this point, “The Mountaintop” fades from a passable mediocrity into a heap of unimaginative dramatic twaddle that, I think, shows Hall’s real purpose in writing her play.

Camae, it turns out, is not a hotel employee on her first day on the job, but an angel sent to escort Dr. King to his end.

Mortality, already on King’s mind, comes to the forefront, but not in an interesting or engrossing way. You’d think that if King knew for certain April 3, 1968 would be his last night on Earth, he would talk about the work undone that he is best suited to do or consider his place in history.

This happens to an extent, but anything of substance seems to take second place to King pleading with Camae, and later by telephone with God — Yep, a black female — to spare his life until he could achieve more of his aims or least train a leader who might attain his stature.

Hall gets a kick out of her portrayal of God and the constant reminders Camae has to give King about saying “She” when referring to Her.

I don’t particularly care whether God is of a specific gender or a race, but in “Mountaintop,” Hall obviously revels in her heavy-handed and self-conscious feminist approach, just as she has fun comparing King, at times unfavorably, with Malcolm X and other civil rights leaders and activists, Gandhi among them.

The play becomes less and less about Martin Luther King and more about what Hall wants to say about things that have probably been on her mind about women’s equality and the legacy of a movement that goes beyond Dr. King.

Her ideas are hackneyed and shallow. They do service to no one and nothing, and they make Dr. King a pawn in a diatribe of Hall’s point of view.

A play that was never more than mildly amusing falls apart entirely. Even the fine acting of Kevin Hanchard, as King, and Alana Hibbert, as Camae at the Shaw Festival’s Studio Theatre cannot redeem Hall’s pedestrian thoughts and dialogue.

Hanchard and Hibbert can be playful and create the sexual tension between King and Camae, but once King has his attack, and Camae’s celestial status is admitted, all seems too pat and ordinary.

Hibbert gets some mileage out of Camae’s sassiness. When King asks where her wings are, she teasingly points to her breasts. Hanchard, in turn, always maintains a  note of dignity, even when it seems certain he will ask Camae to spend the night.

The problem is nothing is enough to give Hall’s play the poignancy that should be inherent in it.

The playwright succeeds to an extent in showing that King is no saint and is susceptible to an extra-marital one-nighter. She also hints well at his complex relationship with Coretta, whom he calls Corrie, by having him argue with her about domestic matters on the telephone but also talking to Camae about how much he loves her and how he appreciates the sacrifice she makes so he can stay on the road and work for racial equality and harmony.

Warm moments, like King’s praise of Coretta, or his byplay with his daughter, Bernice, whom he calls Bunny, are rewarding, but they are also fleeting and more a trick of Hall’s to give her play some rhythm and variety than an attempt to create a complete portrait of King.

As in most plays that depend on biography, “The Mountaintop” drops its share of facts. Many of these are known, but it doesn’t make them less interesting.

Among things Hall posits that sound plausible is King’s disappointment that his last speech, the one delivered in Memphis on April 3 and that includes the words, “I’ve been to the mountaintop,” was not well attended. He fears his message is going unheard, that maybe he has been the deliverer of memorable rhetoric for too long, or that people are not going to participate in numbers that will matter enough to effect change in prejudicial or backwards policies.

You hear King talk about these things, but his tone is casual. He’s explaining his thoughts to Camae instead of declaiming them.

Hall does give King the opportunity to orate at the end of “The Mountaintop.” Hanchard, with the benefit of Kevin LaMotte’s starry lighting,  seizes that opportunity and has the power and intensity to galvanize the crowd, but the passage comes too late to matter in terms of the overall production. Hall surrenders our interest about 15  minutes into her 90-minute play and abandons it altogether with the angel business halfway through. Hanchard can earn our admiration in the last five minutes of “The Mountaintop,” but he cannot salvage the drivel Hall has provided until that time.

Nothing in “The Mountaintop” resonates. Nothing smacks of depth or insight. Nothing brings you closer to Dr. King, his aspirations, or his legacy.

That’s why Hall needs a gimmick. Turning Camae into an angel of death doesn’t deepen her play. It cheapens it. Once the supernatural is introduced, nothing else is trusted. Hall, who is young, may learn as she matures that an exchange between flesh-and-blood people, despite current trends, trumps a relationship between a human and an entity that has no stake in everyday life.

Hall’s best move after Camae’s confession would be to have King reflect on his life and what the knowledge of its imminent ending means in the largest possible context. He may give a kind of farewell address. He may create a roadmap of next steps successors could follow. He may continue the speech we see him writing when “The Mountaintop” opens, a speech entitled, “America is going to Hell,” obviously Hall’s attempt at wit.

Hall’s imagination doesn’t go that far. She’d rather make lame jokes about God’s gender. King, facing death and aware of his situation, is little different from King who was getting cozy with Camae a few sequences earlier. His mind has to turn to more serious, further-reaching thoughts, and even some regret.

The absence of significant change or transformation isn’t Hanchard’s deficiency. It’s Hall’s. She needed a shocker to keep her play going, and she invented one.

The trouble is it doesn’t work because Hall doesn’t have the talent to play it to advantage She doesn’t know how to follow through with her own creativity.  She can noodle about a feminine deity and try to get comic sparks from that, but she cannot tap into the mind or intentions of a thoughtful man who knows he will be alive for just a few more hours.

Naturally, Hall cannot change history and have King, informed of his demise, flee for safety. The angel of death would prevent that. She is there to guide King to a different promised land from the one he speaks about. Death is a given.

Kevin Hanchard and Alana Hibbert keep “The Mountaintop” from being a total bore. They and director Philip Akin do the best they can to keeps things lively and natural. The initial byplay between the characters moves at a good pace. King’s attack, and Camae’s revelation are played well and realistically. Hibbert makes you curious about Camae and how undaunted she is in an icon’s presence. She doesn’t tip her hand until Hall cues it, and even then, Hibbert is vivacious and humorous.

Hanchard seems to revel in making King a man first and a significant figure later. The actor knows the motions people go through while settling into hotels, and he has King go through them in a nonchalant manner. He also has the ease of a man who has been around more than one block and knows how to get what he wants. It is clear he has designs on Camae, who has already leavened his evening and seems ready and willing to provide comfort and more if approached carefully enough.

The actors, with better and more interesting lines could probably put on an engrossing show, but “The Mountaintop” doesn’t provide more than middle-of-the-road material.

The Shaw production was my first encounter with the show. I wonder, after seeing it, how was able to garner an Olivier Award for Best Drama in London. Must have been a slow Stoppard-free, Bennett-free, Mike Leigh-free year!

As far as portraits of Martin Luther King go, Robert Schenkkan makes him a much more dynamic and fascinating character in his 2014 Tony-winner, “All the Way,” which is about Lyndon Baines Johnson, that Katori Hall could by devoting an entire play to him.

“The Mountaintop” was a great disappointment that reinforces my dread, as “All the Way” did not, of plays about the famous.