Women of Will — Pennsylvania Shakespeare Festival 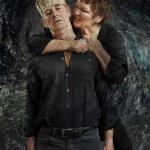 Book my trip to Lenox, Massachusetts. After seeing, and hearing, the magic Tina Packer can conjure using primarily language, movement, and attitude, I want to see anything theatrical in which she has a hand, including her work at the seasonal Shakespeare & Company repertory she founded in the Berkshires decades ago.

Luck, and probably the wisdom of artistic director Patrick Mulcahy, brought Packer, in tandem with actor Nigel Gore, to the Pennsylvania Shakespeare Festival, where the pair is turning Packer’s show, “Women of Will” into a demonstration, and lesson, of how to maximize the brilliance the Bard provides and make it thrillingly immediate.

Packer begins by presenting the identical text from “The Taming of the Shrew” in three different ways that show the choices available to an actor and director in staging an early Shakespearean work that has become controversial because of the means by which Petruchio tames Katherine — starvation, ridicule, stubbornness — and Katherine’s crowning speech, “I do not know why women are so simple.”

Each way Packer delivers her lines is exciting. You are brought into the heart of the play and the scene being enacted. Interpretation can depend on making one slight decision about emphasis, and shrewish or tame, Kate can be merry or sardonic about her treatment and how it influences her tone and expression. She can be straightforward, or she can be cynical, saying what she wants Petruchio to hear, and one-upping her sister and other recent brides, while hinting at the iron fist within the velvet glove.

Packer is just plain masterful as she shows you various Shakespearean heroines she says illustrate the five stages in the Elizabethan’s progression as a playwright. Kate is the first character enacted in a pageant that includes Margaret of Anjou from the “Henry VI” trilogy and “Richard III,” Juliet from “Romeo and Juliet,” Desdemona from “Othello,” Lady Macbeth from “Macbeth,” Rosalind from “As You Like It,” and Marina from “Pericles” among others.

With a versatile British accent, Packer is liquid of tongue and can simultaneously reveal the poetry and dramatic matter within a Shakespearean phrase. Listening to her is a delight and an education, especially when she and Gore perform passages from rarely seen plays, such as “Henry VI” and “Pericles.” Packer makes you wish she would record the entire Shakespeare canon, assaying all of the characters, just so you can hear her mellifluous reading and smart, perceptive phrasing. “Women of Will” is a constant delight because of all the training and experience Packer displays as well as the ease and humanity with which she and Gore portray their various characters. They make the obscure familiar while making you want to hunt down Shakespearean classics to enjoy more of the figures Packer and Gore bring to such vivid and thorough life. (Anyone looking for a well-conceived and acted “Macbeth” need go no further than the Pennsylvania Shakespeare Festival, where Ian Bedford, Susan Riley Stevens, Perry Ojeda, Anthony Lawton, Deanna Gibson, Jacob Dresch, and Suzanne O’Donnell show how easily corruption can be born from suggestion in Patrick Mulcahy’s intense production.)

The amazing thing about Packer and Gore is the depth, power, and resonance they eke from a minimal approach to their material. Both appear as you might expect to see them on the street, Packer wearing a nondescript V-neck jersey top over ordinary pants, Gore in a gray French T-shirt and jeans. A cape or amulet may pop out of a trunk drawer to embellish a character. Packer has a simple green sleeveless, floor-length frock she throws over her own clothes when it serves her characters’ purpose. In general, most of the magic is done with the voice.

Several times, Packer points out how a difference in delivering a speech can change everything. She also shows how the freedom Rosalind has when she addresses Orlando while dressed as a young man, Ganymede, during a segment of “Women of Will” in which she is showing how Shakespeare uses the masculine side of any woman to play what happens when a woman dons male attire and must, usually for her safety, sustenance, or survival, act as a man.

Gore, by contrast, displays the softer side of men, a feminine instinct if you like, in characters such as Orlando and even Macbeth, who must be driven by his wife to proceed with the deed that is the nearest way for him to fulfill the witches’ prophecy Macbeth shall be Scotland’s king. Packer has a wonderful moment when, as Lady Macbeth, she is reading the letter Macbeth sent her following his meetings with the witches and Duncan, the latter of which confirms a prediction from the former. You can see the instant at which Lady M. has the notion to accelerate the course of history and take matters into the hands that will in turn become bloody and then uncleansable.

“Women of Will” has a potent effect. Upon enjoying Packer and Gore’s enlightening assortment of Shakespearean scenes and being so grandly and intelligently entertained, you may feel inclined to run out and see full productions of the Bard’s 38 works in one fell swoop. I have had the advantage of seeing all 38 and would like to view the entire lot again, one after another, in the order they were written. (Canada’s Stratford Festival is a good place to start — “King Lear,” “Antony and Cleopatra,” “King John,” and two takes on “A Midsummer Night’s Dream” being on the playbill. John Lithgow is playing Lear with Annette Bening as Goneril in New York’s Central Park. Trips to Lenox, Mass. — “Julius Caesar,” “Henry IV, Parts 1 and 2,” “A Midsummer Night’s Dream,” and “Romeo and Juliet” — and Ashland, Oregon — “The Comedy of Errors,” “Richard III, ” The Tempest,” “The Two Gentlemen of Verona” — provide other opportunities. Oh, for a grant to see the entire bounty available!)

“Women of Will” is a great way to experience both well-known and arcane bits from Shakespeare’s plays while hearing Packer talk about the five stages of artistic evolution she sees in the Bard’s work and enjoying Nigel Gore’s clever and instructive asides.

Actors of the caliber of Packer and Gore make all look so easy while revealing the complexity of making Shakespeare’s characters timeless and human.

Entertaining beyond measure, educational to a pleasant degree, enchanting throughout, and enlightening in ways too fine and numerous to count, “Women of Will” is an experience no fan of Shakespeare should miss. The sadness and horror Packer and Gore bring to “Othello,” the romantic lightness and sweetness with which they endow “Romeo and Juliet,” Rosalind’s playfulness contrasted to Orlando’s naivety in “As You Like It,” and moving scenes from “Macbeth” and “Pericles” are among many sequences that recommend the show. Wit, insight, and the play of honed, intelligent talent is the bonus.

Me to Lenox and more Tina Packer as fast as my budget will carry me ! (Which probably means next year.)

One comment on “Women of Will — Pennsylvania Shakespeare Festival”