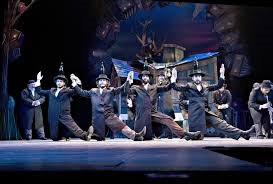 “Fiddler on the Roof” celebrates the 50th anniversary of its original production this fall. The Pennsylvania Shakespeare Festival production at DeSales University demonstrates Joseph Stein, Jerry Bock, and Sheldon Harnick’s chestnut does not date or age. Tales of families clinging to tradition in the face of emerging events and clinging to identity and territory in spite of discriminatory politics have an eternal quality, and “Fiddler on the Roof,” tuneful and cleverly constructed as it is, is a musical that will be seen and savored for many generations to come.

Dennis Razze’s production for PSF employs many of the stage techniques associated with “Fiddler” from its beginning,  the circular road the people of Anatevka  use at a poignant moment being as familiar as the clap and sigh Tzeitel and Motel affect during the number that celebrates their engagement, “Miracle of Miracles.”

The time-honored approach works. PSF’s “Fiddler on the Roof” gracefully touches on all of the themes the book writer, Stein, included in his script, particularly each person’s grappling with individuality, faith, and community, while remaining constantly bright and entertaining . Stephen Casey’s choreography is especially sharp, making the scenes in which Tevye and Lazar Wolf make a bargain (“L’Chaim”), Tzeitel and Motel get married (“Wedding Dance”), and Chava is estranged from her family (“Little Chavela”), into spirited or touching numbers fitting  their musical or dramatic purpose in the show. The “L’Chaim” sequence is both vigorous and invigorating, the PSF dancers — Sean Bell, Cody Davis, and Ben Delony among them —  doing splits while jumping two feet above the stage, performing all kinds of acrobatics from break dancing to backflips, and remaining animated while staying in tight synchronization. The same corps does equally well in the famous bottle-on-the-hat dance during Tzeitel’s wedding reception.

The rest of Razze’s production is just as sprightly, and PSF’s “Fiddler” moves along amiably and amusingly. Though the  staging never rises to lofty heights or aims for depth that would distinguish this “Fiddler” from others, Razze and cast tell the show’s story beautifully and cover all of the tribulations that affect Tevye, his daughters,  and his neighbors in Anatevka. PSF’s is a solid, if standard, rendition of the show. It sails along with zest and energy while slowing down properly in sentimental or dramatic moments, such as Tevye’s dealing with marriages of his daughters, Hodel and Chava, that disrupt the order of his rule-bound world and the code by which he and the villagers of Anatevka live, and the appearance of a constable who tells Tevye and his neighbors they will have to vacate their homes and land by official edict from the Tsar.

Comedy and pathos make up equal parts of “Fiddler on the Roof,” and both are handled adroitly. Razze is able to incorporate the musical numbers and convey the Yiddish-style sarcasm of Stein’s lines while giving his production heart when it counts.

On all basic levels, as theater that shows humanity, supplies laughs, and combines spunk, warmth, and honest emotion, Razze’s “Fiddler” succeeds grandly and does well with complex scenes such as “Tradition,” the opening number in which each segment of Anatevka’s Jewish community tells his or her role, “Sabbath Prayer,” in which Razze deftly shows how other homes in Anatevka mirror Tevye’s in their Sabbath observation, the pogrom that disrupts a celebration, and the villagers’ departure from Anatevka.

Razze is aided by a fine group of perfomers, among them Joe Vincent as Tevye, John Ahlin as Lazar Wolf, Christine Baglivio, Matt Kleckner as Fyedka, and Leonardo Altafini as Mendel, the Rabbi’s son, and the male dance ensemble.

Joe Vincent conveys the humor and irony in Tevye while showing the dairyman’s contemplative side and resolute traits.

Tevye is a man who feels things deeply but who deals with them by shrugging, telling a joke, looking questioningly towards the heavens, and going on with business laughing, sometimes bitterly, at life and himself. If his horse throws a shoe and cannot work, Tevye picks up the handles of his milk cart and announces, “Today I am a horse.” While he wonders why the Jews constantly suffer disdain and torment, he says, “I know the Good Book says we are the chosen people, but once in a while, can’t you choose somebody else?,” at the same time asking God why he should tell Him what the Good Book says.

Vincent is both funny and genuine as his Tevye calmly asks God if, in one of His few spare moments, He decided to play some mischief on his good friend, Tevye.

Vincent understands and shows us Tevye’s style of joking, his way of seeing practically everything from a comic point of view or of using a joke or aphorism to soften life-changing blows. His rails at God, his way of mocking his wife, Golde, and his plea to “Smite me” when the tutor he hires, Perchik, tells him rich men are cursed are not only well-acted but add to the portrait of a good, astute man who leavens life’s seriousness by seeing and expressing the humor in it.

Vincent is also excellent in dramatic scenes such as the beginning of his negotiation with Lazar Wolf, Hodel’s decision to marry the revolutionary Tevye and follow him from Anatevka, and Chava’s relationship and eventual marriage to a Russian Gentile. His performance anchors PSF’s production, and Vincent’s anchor is strong, whether acting or singing.

John Ahlin moves Lazar Wolf more in the foreground as early as in “Tradition,” when you can distinguish his emphatic “Who’s” from others in the chorus. He continues to give vitality to PSF’s production when he asks Tevye for Tzeitel’s hand in marriage, at the wedding scene, and in the departure sequence.

Ahlin makes his presence known and felt through strong personality and a defined portrayal of Lazar. He is man for a man like Tevye to contend with, and Ahlin gives you a sense of Lazar Wolf’s status and place in Anatevka.

All of Tevye’s daughters are appealing in this production. Christine Baglivio displays Chava’s indecision when she is first approached by Fyedka, an outsider to her Jewish community, the “stranger” warned about in “Sabbath Prayer,” and Chava’s pain when she realizes her father will not bend his beliefs to suit her choices, as he did for her older sisters, Tzeitel and Hodel. Leah Scofield has a lovely singing voice and gives justice to Bock and Harnick’s loveliest tune from “Fiddler on the Roof,” “Far From the Home I Love.” Jennifer Apple acts well during the scenes in which she motivates Motel to ask her father for her hand and stands firm about marrying Motel in spite of Tevye’s objections. She also does a fine job establishing the pace and leading the proceedings in the “Matchmaker, Matchmaker” number. (The first Tzeitel and Hodel I saw were Bette Midler and Adrienne Barbeau, and I remember looking at them, particularly their poitrine in the way a teenage boy would, and thinking, “Yes, they certainly fit the images of a dairyman’s daughters!”) (Another irresistible aside: My father’s paternal grandparents had a dairy farm in a Russian shtetl called Winkover, not unlike Stein’s — or Sholom Aleichem’s — Anatevka.)

Leonardo Altafini stands out among the villagers because of his neatly ironic ways of asking and answering questions. His readings, some deadpan, some almost sung, add or supply humor to Stein’s lines, and Altafini garners attention as one who will stand for tradition over the modern ideas Perchik and others bring to Anatevka in days when Russia is about to see the first battles that will lead to revolution.

Matt Kleckner impresses with his openness as Fyedka. At  no time does he act as if he is anything but smitten with Chava and her intellect. Kleckner portrays Fyedka as  a man who will defy mores and peers’ taunts to obtain what he wants and who will stare down anyone who minds his business enough to oppose his intentions.

Anne Kanengeiser is a put-upon Golde who isn’t quite in tune with her husband’s humor or habits and only barely hides her frustration with him. Patti Mariano is a hoyden as Yente. At 4′,6″ tall, she uses her height, or lack of it, comically by bustling about and imposing herself on everyone’s business. Gordon Gray is stalwart and funny as Mordcha, the innkeeper who sells the schnapps  that toastsTevye and Lazar’s agreement and caters Tzeitel’s wedding. Jonathan Raviv is serious-minded as Perchik. Hunter Ringsmith is appropriately bashful as Motel.

Will Neuert’s set was versatile, with a house that opened up to show its interior and that could be moved to various sections of the stage, when closesd, to make the room or give the perspective needed for a scene. Sam Fleming’s s costumes were on target for “Fiddler.”

“Fiddler on the Roof” runs through Sunday, June 29, at the Pennsylvania Shakespeare Festival, on the campus of De Sales University, at 2755 Station Avenue, in Center Valley, Pa. Showtimes are 7 p.m. Tuesday, 8 p.m. Wednesday through Saturday, and 2 p.m. Saturday and Sunday. Tickets can be obtained by calling 610-282-WILL (610-282-9455) or going online to www.pashakespeare.org.