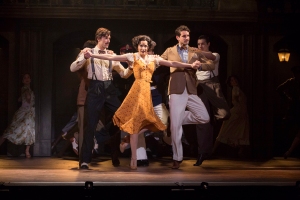 Michael Grandage’s production of “Evita,” touring the United States after runs in London and New York, is a pageant-like affair that successfully meets the challenge of staging a work that was designed originally to be listened to and not seen, strives for a more Latin feel than previous mountings, and keeps its audience entertained in fine style while never dazzling or overwhelming.

Caroline Bowman, in the title role, does not have the majesty some of her predecessors brought to the lead character, but she conveys the fire of ambition, a knack for knowing how to handle people and situations, and a sense of irony that lends her portrayal wit. Josh Young is dynamic as the commentator, and Evita’s severely sardonic critic, Che. Sean MacLaughlin is a likeably suave and, at times, self-effacing Peron, and Christopher Johnstone does more, as a singer and an actor, with Evita’s first conquest, Agustin Magaldi, than anyone I’ve seen in the part.

The dancing and acting are generally good, Young finds the bite in Che’s disillusionment with Evita, and the variety in Andrew Lloyd Webber and Tim Rice’s score is more pronounced than usual, but this “Evita,” though more intimate and probing than the original Harold Prince staging, is somehow colder. Even though Grandage brings you closer to Lloyd Webber and Rice’s history-based characters, you watch them contentedly without much personal regard for what happens to them. Grandage’s “Evita” doesn’t stir emotion. It tells a story and gives pointed voice to Rice’s deliciously cynical lyrics, but it acquaints you more with figures acting out a situation than it attracts you to people who had a powerful impact on one country’s, and even the world’s, political composition in the aftermath of World War II, in which Argentina remained neutral until it declared war on the Germany and Japan in late March 1945 when the battles in Europe and the Pacific were near their ends.

It is ironic that Grandage presents clearer, more detailed portraits of the principals, particularly Che and Magaldi, but doesn’t involve you as strongly in their lives or fates as Prince did. While production numbers, and Rob Ashford’s choreography in general, have dash and luster, crucial dramatic scenes, such as Evita greeting Argentinians as their First Lady and singing the show’s most famous song, “Don’t Cry for Me, Argentina,” and the scenes in which Eva succumbs to her cancer are flat and elicit no visceral response. The sequences that work best are the linked pieces, “High Flying Adored,” “Rainbow High,” and “Rainbow Tour” in which Bowman and Young show a lot of sass and atttiude as Evita enjoys her ascent and the glamor that comes with it, and Che tries to find out the “instant queen’s” private reaction to all that is before her. These passages have heightened wit that make them fun and gives some insight, Rice’s more than anyone’s, into what it must be like to live a fantasy while also participating in high-stakes Realpolitik. MacLaughlin also has a good time playing them and adds to the quality of “Rainbow Tour” as Peron.

The scenes that are hardest to incorporate smoothly into a staged “Evita” are the ones that involve the middle and upper classes’ reaction to their new First Lady. These are the sequences that work on a recording but seem to interrupt, and interrupt intrusively, when brought to the theater.

Grandage makes these passages seem an integral part of the whole. “Dangerous Jade” and other such numbers make  more of an impression and clearer a statement than in the Prince staging where they were an excuse for grand choreography. As one admires Grandage’s cleverness in keeping “Evita’s” flow while giving the scenes depicting class warfare and military rivalry some theatrical heft, one also has to say the passages are fun to watch but have no lasting effect. Again, intimacy that goes beyond adroit, diverting presentation is missing. As amusing as the touring “Evita” is, it doesn’t make you fall in love with or dread the death of a lead character who should have the same charisma with the theater audience that Eva Duarte de Peron had with the Argentinian people.

Examples of strong theater that doesn’t lead to strong association with Evita, Che, or Peron abound. The character that may make the biggest impact is Johnstone’s Magaldi  because you see more of his dilemma with 15 year-old Eva and because Johnstone is given the chance to do something with Magaldi’s signature song, “On This Night of a Thousand Stars” on two occasions, the one in Junin when he meets the teen Eva and the one in Buenos Aires when, after several years, he encounters the popular radio star, Eva Duarte.

I don’t blame the actors for the distance this production seems to create. I think Grandage may have purposely underplayed emotion to give Lloyd Webber and Rice’s satire take deeper root.

Why he would choose to do that is a mystery, but appreciation for this smart and diverting production is for its fluid sweep, its lively dance numbers,  and its emphasis on Rice’s/Che’s commentary and not on our strange lack of emotional  involvement with Evita, even when she is approaching death at age 33 in 1952.

One can see the reason why “Evita” is so popular.

From the time the two-disk album was issued with Julie Covington as Evita, the cleverness of Lloyd Webber and Rice’s work was apparent. The composer, beside writing lush leitmotifs that repeat throughout the “opera,” included tango and other Latin music while writing a tradition lagoon-by-moonlight number for Magaldi.  The “Buenos Aires” number, in which Eva declares her intention to rule the city, is a happy stew of Latin sounds. “High Flying, Adored” and “Rainbow High” are exciting arias. Che’s various commentaries, from “Oh, What a Circus” onward, show Rice’s clear-headed point of view. Grandage has the good theatrical sense to include the song Lloyd Webber and Rice added to the 1996 movie, “You Must Love Me,” which earned an Oscar as Best Song.

Rice’s irony drips when Evita intones, “There’s nothing calculated,  nothing planned,” upon meeting the rising political figure, Juan Peron, and rings with honesty, if fatuous honesty, when Eva says, “But one thing I’ll say for me. No one else could do it like I can” at the end of “High Flying, Adored.”

Eva Duarte is conniving and ambitious in the manner of so many heroines from the fictitious Becky Sharp to any number of movie characters of the ’30s and ’40s. You delight in her scheming and root for her advancement even as you see her motives, more capricious and aggrandizing than outrightly nefarious, and receive incriminating information from Che. Her charm is in her combination of strategy and lack of conscience and is exacerbated by her glamor and strong bond to the Argentinian working class, for whom she is a champion.

You want Evita to succeed on her “Rainbow Tour,” even if what she represents is Fascism of a kind Europe worked to erase in a devastating war. You want Peron and Eva to win elections and retain power even though you are informed of the brutality they often employ to continue their dictatorial reign.

Even in this production, in which Bowman has some wonderful moments — Her equally stern but sympathetic stare at the Peron mistress she “just unemployed” is well played as is her thirst for luxury in “Rainbow High” — but doesn’t earn your intense affection, you cheer for Evita’s success. It seems odd that Bowman’s Evita never touches your heart even though it appeals to your mind.

Breezy though Lloyd Webber’s score is, Rice never leaves you in doubt about what he thinks of Peronist politics and tactics. His lyrics are never elegant, and they often stray from Lloyd Webber’s rhythms or standard rules of rhyme, but they are tart and funny as they skewer the dictatorial ideas the Perons represent.

Caroline Bowman registers boldly as Eva. She performs “Buenos Aires” with gusto and is sweetly efficient as Che sings “Good Night and Thank You” to the men she uses until she snags the promising Juan Peron.

The only time Bowman’s acting faltered, slightly, is during the “Don’t Cry For Me, Argentina” number that propels  “Evita’s” second act. Perhaps Bowman is too aware of the iconic nature of the sequence and of the white dress she dons while performing it. In this scene, she seemed self-conscious and uninterested. Grandage seemed to treat this passage as a museum piece, too familiar to change. The “Don’t Cry For Me” sequence is where the emotional ties to Evita are bred. When the connection between Evita and the audience doesn’t occur on that balcony of the Casa Rosada (Argentina’s counterpart to the White House), it never emerges.

At first, Josh Young seemed to articulate too much as Che. He seemed to be leading us too strongly to Rice’s meaning instead of letting us find the jokes, the barbs, the sarcasm, and the meaning in the librettist’s lyrics. Once one got used to Young’s style, the self-consciousness of his approach faded, letting us enjoy the actor’s energy and wit.

Young exuberantly presents Rice’s cutting commentary. The look of amused disdain on his face works as commentary on its own. Young’s robustness as Che shows he’s as vibrant and acute as Eva.

Sean MacLaughlin endows Juan Peron with self-knowledge. You can see the calculating side of Juan as clearly as you see the ambitious side of Eva. MacLaughlin always seems wisely assured. He has the look of a man who expects to win and keep winning, smugness combined with charm.

Christopher Johnstone is a memorable Magaldi. He doesn’t play his part as if Magaldi was a mere functionary, even though he could be categorized as such. He plays with him with dimension and shows signs of the pride Magaldi takes in Eva’s ascension to social, professional, and political status.

Krystina Alabado is sweet as she sings “Another Suitcase” and plots her next move now that she’s been replaced by Eva as Juan’s mistress.