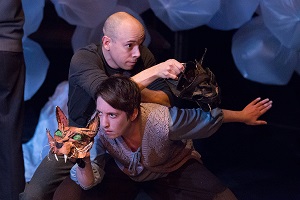 Sebastienne Mundheim’s production of Dylan Thomas’s “A Child’s Christmas in Wales” for Lantern Theater is a theatrical dichotomy. It is admirable in its intention and abundant in creativity while being underdone in ways that undercut and diminish its value as an entertainment. It seems to be more like an exercise in inventiveness and prop creation than it is a congenial or absorbing approach to storytelling.

Thomas’s tales of the Christmases he spent as a child near the coastal Welsh town of Swansea are evocative. In his prose poem Thomas says one Christmas blends into another because they  were so similar, redolent with snow, boyish mischief, aromatic cooking, presents practical and playful, and aunts and uncles who had their peculiarities and asked little boys to be quieter.

Thomas’s work is short. It would take perhaps 15 minutes for someone to read or narrate it. To translate it to the stage, even for a play of a hour’s duration, the running time of the production Mundheim conceived with Lantern artistic director Charles McMahon, a director would have to think of and realize imagery that brings one collective Christmas day in Wales home to a theater audience. Time and space must be filled with more than words and accomplish their own beguiling, no matter how pleasantly actress Genevieve Perrier presents Thomas’s wistfully colorful memories.

Mundheim seems to have take a page from Jerzy Grotowski and fleshed her production out with basic items — balloons and snow made from billowing inflated white trash bags, smoke and other items represented by yards of gauze, presents, the serious ones and not so serious, also appearing in gauze unless Mundheim has a concrete prop she can use. There also puppets, fish, a large cat, a fire truck,a mailman on cross-country skis, and houses that fit together like Russian matryoshka dolls, smaller ones nesting under the roofs of larger domains. It all impresses you with its clever craftsmanship and versatile use of materials. Mundheim certainly knows how to be resourceful and fanciful on a budget.

The conundrum is that in spite of Mundheim’s “A Child’s Christmas in Wales” being exciting in terms of anticipating what the director will think of next to express and illuminate Thomas’s story, the visual and narrative effect is never pretty or charming.There’s no esthetic or grace to match the creativity. Jokes occur, but wit, in terms of humor, is rare. Some sequences seems more designed to fill time than to enchant or entertain. A lot of the action seems gratuitous and self-conscience, clever for clever’s sake.

As a critic, I am torn. I long to praise Mundheim and McMahon for their originality and their sense of theater as being more than the words on the page. I want to thank Mundheim for her economy and the intricate mechanics she arranged to extract gauze from various containers, to make the puppets, including the mailman on skis, an integral part of the presentation, and to string the practical presents on a clothes line that soars above one gallery of audience members.

I would prefer to say how much I liked the play involved in the actor’s movements, the way they had of using props almost as if they toys, their trick of putting items over their heads and talking as from the windows of houses, etc., and their ability to play a musical instrument or manipulate a marionette that seems to emerge from nowhere.

The ideas in Mundheim’s concept are magical. She thinks like a child a play. And also like the parent who finds neat ways for the children to stash their toys away. That’s why I wish the positives could prevail, positives than include  the work of Perrier, Charlie DelMarcelle, Doug Hara, and Amy Smith.

Unfortunately, for me as much as anyone, it is the lack of rhythm, the shabbiness of some of the props — too much gauze when perhaps ribbon, cloth, or an actual object, e.g. real  mittens or mufflers,  would serve better — and busyness for the sake of exhausting time that register. Imaginative theatrical ideas, truly smart concepts and recognizably sharps attempts to match visual reality to Thomas’s text, do not become theatrical. Grace is missing. The flow of the show, however tightly choreographed, doesn’t seem to move to a musical beat. Wonders occur, and the audience acknowledges them, but they don’t translate to delight.

So much care is taken with so many elements of “A Child’s Christmas in Wales,” I don’t think more rehearsal would make a difference. The actors move beautifully, but the poetry remains in Thomas’s writing and Perrier’s voice, not in what happen on stage no matter how interesting or clever it is. I would like to see the production rethought with a mind towards charm, with an idea to go beyond impressing to fascinating.

Again, I watched “A Child’s Christmas in Wales” with admiration for Mundheim and her troupe, but I needed Perrier’s recitation to keep me involved in the story, and my emotions always stayed distant, as if I was studying rather than experiencing a concept that bordered on genius but lacked an ingredient or two to make the end result useful, nourishing, or satisfying.

Toys and construction are a theme for Mundheim’s production. Everything, including houses and fire trucks are handled like a toy, as if the stage was a giant rumpus room. Some of the toys always hit their mark and cause a smile, the mailman of skis I can’t stop myself from referring to for an example, or a giant cat, perhaps too big, that gets assembled from scrap leaning against the stage walls.

A fire engine coming down a hastily assembled road that is, for some reason, bright blue, among all the white and gray on most of the stage, also has an effect.

So, you see, some things work as I think Mundheim and McMahon intended they should. I’m sure they were attempting to create magic. I’m the Grinch who thinks more effort should have expended.

Of course, there are moments I adored. Five seconds, during which DelMarcelle reaches over the open roof of a cardboard, and with a tiny fork and knife begins to carve a papier mache or plastic turkey, was enchanting. The whole spectacle of miniature furniture making a complete dining room, with chairs to one side so the uncles can unfasten their pants and retire after eating, was lovely. I saw in that house and that table what the entire production could have been like.

Houses with lanterns in the window figure importantly in Thomas’s text and on Mundheim’s stage. It is a grinworthy surprise to see that they are made from cardboard boxes. It is fun to see a house pop out from another house or to have a house become a character as an actor puts it over his or head and speaks through its windows, but the fun is not sustained.

I think I could sum up what needs to be fixed, or at least what I say needs to be fixed, by concentrating on the puppet that represents Thomas as a boy in much of Mundheim’s show. I like the construction of the puppet, a handle like one you might see on a iron appearing where the spine would be, so an actor, usually DelMarcelle can control movement more easily, and the easy lope the boy has when he moves. I also understand that the puppet is meant to fit in the theme of toys and represents a plaything as much as it does a living boy. But why isn’t the puppet finished?

I think I have developed an aversion to puppetry in general because the puppets are not made to be cute or pretty. They often look haggard or scraggly. That’s not what I want from a product of imagination. I like it when things are complete and neat and made to look realistic. Especially, as in the case of the boy puppet in “A Child’s Christmas in Wales,” the boy is meant to be authentic. So why keep his face stark white and crooked? Why make him rough-hewn or to look as if he’s worn or faded? Isn’t it just as easy to make a finished face, especially when I could see the face was well crafted?

The idea that slapdash or make-do is the same as neat and grand, or better from a “poor theater” point of view, doesn’t wash. I realize I am revealing a prejudice, one you, my reader, should know. But I don’t think it’s only my prejudice, my preference. I think “A Child’s Christmas in Wales” would have been more enjoyable, at  no more cost to the theater or the maker of the puppet, if they boy had his face painted and wore actual clothes. I think that, as much I admired the engineering that went into making smoke arise from a house during a fire by having charcoaled gauze pulled from the house by hangers directing it upward while actors freed the gauze from the cardboard box representing the house, I would have enjoyed it more if the smoke emerged more gracefully.

I was constantly tempering respect for Mundheim’s ideas, and her cast’s flawless execution of them, with dissatisfaction with the messiness of so much that happening on stage.

Believe me, I would have preferred to be in constant awe and to tell you to run down to the Lantern and experience it yourself. My companion, a retired pre-school teacher, said she loved the creativity because it brought Thomas’s story to life, and children will love the fire truck and the cat and the pulley that moved the practical presents.

I agree. I enjoyed all of that as well. But from an intellectual point of view. On this occasion when theater and theater craft were rampant, I wanted more neatness, tighter coordination, smoother flow between scenes, more discreet choreography, a more realistic puppet, and less gauze. I felt as if I was watching an interesting experiment, one I thought should be done…but not exhibited or revealed until it was ready. “A Child’s Christmas in Wales” did not seem ready to me.

Mundheim and McMahon hit on a effective mode of storytelling, but it turned out not to be as effective as planned because the words, delivered by Perrier, provided 95 percent of the satisfaction to be derived from “A Child’s Christmas in Wales.” I would encourage Mundheim and McMahon to keep perfecting this show or to use it as model for another. The concept is that good. But to think more about elegance, an elegance to match Thomas’s language rather than a roughness to match his Swansea surroundings, and pay as much attention to execution as was given to construction and mechanics.

“A Child’s Christmas in Wales” runs through Sunday, January 5 at the Lantern Theater, 10th and Ludlow Streets, in Philadelphia. (The entrance in on Ludlow.) Showtimes  are 7 p.m. Tuesday through Thursday, 8 p.m. Friday and Saturday, and 2 p.m. Saturday and Sunday. No show is scheduled for Christmas Eve, Christmas, New Year’s Eve, or New Year’s Day . Shows will be given at 12 noon Tuesday, Dec, 24, 2 p.m. Thursday , Dec. 26, Friday, Dec. 27, and Tuesday, Dec, 31. Matinees on Friday, Dec. 27, Tuesday, Dec, 31, and Saturday, Jan. 4 will be followed by a puppet workshop for children conducted  by Charlie DelMarcelle. Tickets range from $38 to $30 and can be ordered by calling 215-829-0395 or going online to www.lanterntheater.org.