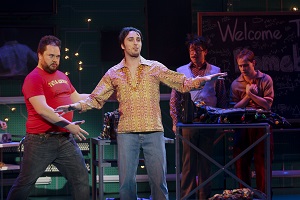 “Nerds” provides fun in so many ways. Its book, by Jordan Allen-Dutton and Erik Weiner pays tribute to tech revolutionaries Bill Gates, Steve Jobs, Paul Allen, and Steve Wozniak while getting great satiric mileage from their foibles — Gates’s  awkwardness and Jobs’s ego — and comic thrust from a collection of good jokes that  range from puns and a variety of deprecation (self- and otherwise) to snappy one-liners and grand pronouncements, some of which are, or will come, true. Beyond the material Allen-Dutton and Weiner provide is hilarious and creative choreography by Joshua Bergasse who seems to take a particular delight in making Bill Gates dance, lively and witty direction by Casey Hushion, and a slew of clever, over the top, yet flesh-and blood performances that fall into the category of caricature while remaining human and realistic. Stanley Bahorek is especially excellent as he portrays Gates’s combination of social ineptitude, business acumen, and megalomania while infusing his character with shyness and a Teddy bear quality that makes him lovable.

“Nerds” may stretch a point here and there. I don’t think Melinda Gates was ever called Myrtle or resembled the woman that becomes Bill Gates’s partner in “Nerds,” but any exaggeration, deviation, or invention works within the context of this musical and matters about as much as a Tandy build-it-yourself or a Compaq boot-up job next to the latest Mac or PC. Everything in the show is smart and entertaining in a shrewd way that shows nimble, youthful minds at work.

The songs in “Nerds” are mostly productions numbers meant to amplify a situation, declare triumph, or give one of the main characters a chance to vent. Lyrically, they do their job well by translating the show’s general style of humor in a musical form. Like the production, numbers tend to be energetically fast-paced, funny, and meant to turn the most dedicated of nerds into a momentary rock star. They do not aim for poetry, emotion, or sentiment. They are musical extensions of Allen-Dutton and Weiner’s dialogue. Musically, Hal Goldbberg’s tunes smack of the current trend to write jingles more than melodies. They have that easy style that makes Goldberg’s score sound interchangeable with many contemporary musicals. That said, they serve the lyrics and provide great dance rhythms for the most creative of Bergasse’s production numbers. They also draw fittingly on several genres of popular music. You may not find originality or the finesse of Gershwin or Berlin, but you will note the verve, clarity and purposefulness of Goldberg’s music. (By the way, the composer is a great dancer. He sat in front of me on opening night, and I guessed who he was because he anticipated every beat and, seated, moved his shoulder and hips lithely while pursing his lips and singing along to the music. It was adorable. I wanted to like the quality of the music as much as I appreciated the energy of it…and Goldberg.)

“Nerds” follows Gates, Jobs, and their henchmen, Allen and Wozniak, from 1975, when they compete in a local computer club, Homebrew, contest that will yield $10 worth of pizza to the creator of the coolest new gizmo (Jobs and Wozniak’s), to the current day, with acknowledgements of Jobs’s death and Gates’s philanthropy. It earns honest laughs all along the way by showing Gates’s keen business savvy and Jobs’s knack for imagining the best big thing. It also shows how Allen, though obsessed with basketball, keeps track of the tech end at Microsoft and how Wozniak is the real genius and innovator of the group while the others excelled more in negotiation, management, and entrepreneurial spirit, Jobs being the visionary who knew how to package and market Woz’s magic. Even in this highly comic mode, witnessing all of their creativity, technological and theatrical, brings a rush. Allen-Dutton, Weiner, and Goldberg know what to emphasize and what to satirize in “Nerds,” and they go about their business with brio.

The seminal duos from Microsoft and Apple are not the writers’ only targets. Their portrait of IBM mogul, Tom Watson, at first a puffed-up, polished, and formal executive, a cross between a snob and a pretentious headwaiter, later a tieless addict looking for a role in the new tech world and for a fix, is wonderfully conceived and realized. Kevin Pariseau is masterfully canny playing the grandiose Watson, who schools Gates in the way of the world, encouraging him to stay a step ahead of the pack, and just as clever playing the fallen executive, who retains his pearly voice and high style while in every other way, being down and out.

Nor are Gates, Jobs, Allen, and Wozniak the only nerds. Hushion’s production woodwork is full of them. We see them in various places in various stages. Naturally, they are supplied with all the telltale trappings, from large black-framed glasses to unmatched clothes and pocket protectors. Gates and Jobs are provided with girlfriends, or at least female interests, who they meet at the fateful Homebrew contest and who exemplify the woman’s take on nerdiness. Like Gates and Jobs, they will become leaders of tech giants, Netscape and Oracle. Sally, the character assigned to be Gates’s fantasy, but Jobs’s partner, is working at Xerox when Jobs meets her, and in “Nerds,” Jobs learns from and does to Xerox what Gates learns from and does to IBM. From the time of the Homebrew competition, Jobs beating Gates or getting what he wants before Gates is a leitmotiv of the musical and a potent source of comedy.

Visual and verbal gags abound. Dutton-Allen and Weiner are as merciless about Gates’s awkwardness as Gates is ruthless with colleagues and competitors. At least twice they have him make natural blunders because of Jobs’s name, e.g. “I’d like to give you a hand, Jobs” or “I can get you some blow, Jobs.” You see the innuendo.” Bahorek, as Gates, is great at these moments, and Matt Bradley, as Jobs, has wonderful timing at delivering Jobs’s one-liners and exulting in Jobs’s next inspiration. Hushion is to be congratulated for several set-ups, shrewd ones, that evoke laughs that come from her ability to plot and stage a sight gag. Allen-Dutton and Weiner get extra kudos for their depiction of Wozniak as the willing wizard in the background who sometimes wonders why he is not more center stage. In a song, “The Revolution Starts With One,” Woz, though at that point Jobs’s equal at Apple, has to remind that there is one Steve Jobs and one Steve Wozniak masterminding the operation. (It is Wozniak’s idea to attach a monitor and keyboard to a compressor and make them work as a unit that begins modern times as we know them, and the “Nerds” authors make that clear.)

Geeks who have been fussing with computers  since the ’70s and ’80s will get a kick out of jargon jokes whether nostalgic or contemporary. Seeing the “c:>” prompt today is hilarious while two decades ago, it was our cue to boot up our computers or summon a new program when we changed floppy disks. Jobs makes a mantra out of “abort, retry, fail,” and a giddy memory comes when you see an error code with a number attached to it, especially since it happens while Gates, the master of software, is giving a demo of one of his nascent systems. You see the various models of Apple products from the Macintosh to the iPod, and you giggle at the past while reveling in the genius of Jobs, Gates, and cohorts. Where would we be without them? I can tell you for a fact that a computer, with a modem, changed my life and fortunes when they allowed me to transmit manuscripts from home instead of delivering them or arranging for messengers. (Thank you Stu Rose, Larry Kane, and Gene Siskel for introducing me to the laptop and to the person I know would prefer to remain anonymous for teaching me how to use each new contraption.)

Bahorek is a marvel. He scrunches up his face in a scowl when Gates is thwarted by romance or irked by not achieving his next breakthrough fast enough. He revels in victory. He goes from congenital, unaware nerdiness to preening. And he dances like a house afire while adding wit to the gusto.

Actors are always in the moment, but Bahorek is ahead of it in the best way, almost like Gates taking Watson’s advice and staying ahead of competing technology. He is comic without being ridiculous, so Gates can be funny, as in someone to be laughed at, and human at the same time. Bahorek embraces Gates’s social ineptitude, especially when it comes to women. He also captures his ambition, both to succeed and tweak the noses of the kids who threw him in lockers when he was in school.

Bradley has a different kind of mania to convey. Unlike Gates, he is coolness personified. Jobs is not so much a nerd as one who knows how to fall in league with nerds to everyone’s advantage.

Bradley’s performance is  big and intentionally bombastic. His Jobs is in love with himself, and Bradley leaves you no doubt about how far his affection goes. It’s a rock star turn for the one figure that brings some suave hipness to the computer world.

Like Bahorek, Bradley can present the many moods and stances of Jobs, especially the ones in which he announces or enjoys hearing about his superiority. He also portrays the unmanageable Jobs and has a good time with the number, “Down and Out in Silicon Valley,” which eventually involves most of the featured cast.

Benny Elledge is a fine Steve Wozniak, the character who is content to stay in the background to invent and refine while sometimes wanting people to know he isn’t what a Jewish comedian would call “just chopped liver.”

Rob Morrison never loses his nerdiness as Paul Allen and is quite funny when he portrays Allen talking about his basketball fantasies. When Allen is ecstatic the entire Portland Trailblazers team posed for a picture with him, Gates reminds him they had to do it because Allen owns the club.

Lexy Fridell goes through a nice transformation from total geek to high-level Silicon Valley executive who continues to think like a nerd, and who retains an attraction to Bill Gates. Briana Carlson-Goodman is sophisticated as Sally, the woman enamored of Steve Jobs. Blake Segals scores big in the role of a Italian pulcinello, a clown in traditional harlequin garb who represents one the joke possessions acquired  by the fabulously wealthy Gates. The entire ensemble enthusiastically gets into the humor, quirkiness, and energy of the piece. It includes Alyse Alan Louis, Raymond J. Lee, and Catherine Ricafort in a variety of guises that allows each to have a moment to shine individually.

Any costumer would sacrifice healthy eye teeth to design the clothes for a musical called “Nerds,” and Thomas Charles Legalley, working from original designs by Alejo Valetti, adds to the tone of wit and visual authenticity that is so primary to Hushion’s production. Lee Savage provides a serviceable set that shows the questionable taste nerds may have while also celebrating the high tech world with its multiple screens.

“Nerds” runs  through Sunday, December 29 in a production by the Philadelphia Theatre Company at the Suzanne Roberts Theatre, Broad and Lombard Streets, in Philadelphia. Showtimes are 6:30 p.m. Tuesday, 7 p.m. Wednesday, 8 p.m. Thursday through Sunday, 1 p.m. Wednesday, 2 p.m. Saturday, and 3 p.m. Sunday. No shows are scheduled for Christmas Eve or Christmas. A 7 p.m. show is set for Sunday, December 29. Tickets range from $79 to $51 and can be ordered by calling 215-985-0420 or going online to www.PhiladelphiaTheatreCompany.org.