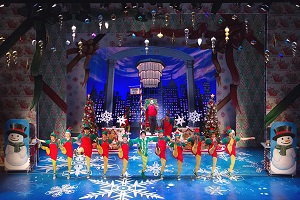 “Elf” is the right kind of sappy. The musical, currently entertaining with charm and gusto at Philadelphia’s Walnut Theatre, and venues throughout the U.S., is one big invitation to smile. A silly story, a tale meant for a children’s Christmas book, is told with style and warmth. Amid the broad grin “Elf” forms on many a face, come some tears, as Buddy, the elf in question, goes from being a homeless orphan to a man with a family, two families actually, that are legitimately his. In general, the show provides amiable fun and snowfalls of bright holiday spirit.

Marc Robin’s production for the Walnut is part cartoon, part sitcom, and all engaging entertainment. The directors walks the fine line between being too broad in comic approach and maintaining a core of reality that keeps this fantasy plausible on enough levels to keep an audience involved with Buddy and interested in his story.

He is well aided by book writers Thomas Meehan and Bob Martin, two proven bona fide pros whose script includes wry, sarcastic lines to appeal to audiences who might be more prone to scoff and complain about lack of sophistication while it keeps matters on a basic level that will delight children. This particular adult, arguable as my boasting that attainment of maturity may be, was thoroughly delighted. Meehan, who has earned Tonys for “Annie,” “The Producers,” and “Hairspray,” and Martin, who provided the scrumptious book for “The Drowsy Chaperone,” know their business and can mix froth with touches of urban impatience and measured sentiment to create a happy show that remains simple and accessible but never panders.

You expect clever writers like Meehan and Martin to come through. The surprise, the huge, huge surprise, is the songs and particularly the lyrics by Matthew Sklar and Chad Beguelin.

“Elf’s” score is one of the most welcome of several seasons. Composer Sklar and lyricist Beguelin actually write tunes that show thought and creativity with words that pay attention to image, ideas that are expressed better in song than dialogue, and rhyme! I have no idea who Chad Beguelin is or what he looks like, but I want to kiss him and thank him for honoring and preserving a quickly dying art form, songwriting.

People who don’t see a lot of new musicals don’t know how critical a condition the Broadway score is in. Beyond the handful of shows that become hits, and even in some of those, music and lyrics are routinely reduced to doggerel and tripe. Lyrics, rest Oscar Hammerstein’s soul, take the greater beating. Show after show, especially in smaller theaters, has people passing as lyricists writing basic declarative sentences, mostly cliches about love with rhymes that are forced or downright sloppy, strung together as if they reveal something more than the inadequacy of the lyricist. These songs aren’t even basic. At best, they are derivative and plagiaristic. At worst, and worst commonly prevails, they are the soporific maunderings of a fourth-rate mind. Or should I say a fourth-grade mind? These alleged songwriters wouldn’t recognize an honest emotion or elegant phrase in a line-up, let alone come up with either. I call the syndrome the Amanda Greening of Broadway, heaven spare her genius of a father from dying a second time at his daughter’s oeuvre. Cleverness, felicity, and poetry have been roundly abandoned. Ease, facility, and insult to human language have taken over. No wonder Stephen Sondheim, Maury Yeston, and Lynn Ahrens walk on water.  Chad Beguelin follows in the footsteps of the best. His lyrics advanced “Elf’s” story and imparted information we didn’t know about characters. It had interior integrity and language of a level that makes you think Beguelin read or listened to worthy material before he took pen to paper and put words to music. Hey, it’s of a quality that entitles Beguelin to be called an artist and not a cheap sentimental cliché peddler.

Beguelin redeems lyricists. His partner for “Elf,” Matthew Sklar does the same for composers. From the moment “Elf’s” overture begins — Yes, “Elf has an overture, imagine that. —  you are aware someone, Sklar, has written a tune and that the tune has its basis in musical theater history as opposed to rock, rock and roll, or some other popular genre that has hijacked the Broadway stage in recent decades. Gershwin, thank goodness, has more influence than that most egregious of frauds, Elton John. Even rock based scores, appropriate for a show like “Kinky Boots,” are an improvement on the type of music (?) that most often accompanies the “I’m in love, thank God above, He gave a needed shove to my heart” doggerel that passes for today’s lyrics. The noise that cloys are the sing-song  rhythms that barely make it past one octave and make the average folk song sound melodic. I call it the “off we go” music, and not only because at least once in the multitude of shows that feature it, a lyric begins with that clever, clever bit of wordcraft, “Off we go.”

Sklar writes songs. Every number in “Elf” is worthy to be called a piece for musical theater. It has melody and drive that goes beyond being this era’s usual dull collection of notes that includes an occasional end-of-phrase sharp that convinces the composer he or she has done something creative. Sklar employs standards that put this tunes on the same plane as standards. Again, you sense an artist and not a dabbler at work. “Elf’s” score may be simple and basic, but it also has legitimate lilt and movement. I was and remain tickled to hear it. It gave me another reason to smile continually.

Admiration of Sklar and Beguelin’s work  noted, that smile was a just reaction to all that was happening on the Walnut stage, especially in the person of Christopher Sutton, who plays Buddy, a 30-year-old who, as an infant, crawled into Santa Claus’s bag of toys and gets taken to the North Pole where Santa puts him among the elves to live within a community, make toys, and be part of both a household and tradition. “Elf” tells of the time Santa judges Buddy should confront his actual situation as an adult human. He is sent to Manhattan, of all places, to make his way in a wider, modern, less idyllic world.

Sutton captures all the facets of Buddy, and they are many. This takes some skill and acting savvy because Sutton has to negotiate Buddy’s naivete with the adult and human desire for acceptance and affection and balance his appearance as six-foot man with his childlike qualities. Sutton conquers all challenges. The beauty of his performance is how he always maintains his elfin persona even when a scene calls on him to be more like Gene Kelly or Jimmy Stewart.

Sutton makes you love Buddy from the start. This affection for the character carries you through some corny sequences or scenes designed to demonstrate Buddy’s need for a guide through this busy, contemporary world in which he finds himself.

Plunking Buddy in Manhattan, to which he walks from the North Pole, accomplishes two things. It establishes worry and sympathy with the audience, who don’t want the lead character to be hurt or harmed. It also allows him to walk around in an elf outfit without anyone taking much notice. Of course, the costume helps a lot when Buddy wanders in to Macy’s and is promptly set to work in Santa’s Village to comic effect.

Meehan and Martin are adept at finding sources of comedy and conflict in Buddy’s predicament. They supply him with a love interest and a father, who is not quite prepared to cope with a grown son he never knew he had from a liaison that occurred when he was in his teens.

Sutton masters all Buddy has to do with secure show biz flair. He keeps Buddy an overgrown but optimistic and congenial child, reveling in his innocence and confusion while showing when Buddy is hurt, primarily by his father, or forced to confront a situation that will lead to his familiarity with the real world and to his maturity.

Sutton makes the complex look simple and effortless, just as a master entertainer would. He has good material to work with, but Sutton is the core of “Elf,” and he make the Walnut production a constant joy to watch.

The Walnut cast in general is in synch with the tone Robin sets for the production. The characters are more sitcom-like than natural, but that approach is appropriate to the story and makes “Elf” more accessible to young audiences than subtlety would.

In a musical designed to appeal as much to children as to adults, it is fitting that Sutton be so resolutely childlike as he adjusts to real life. It’s also pleasing that the child performer in the play, J.D. Triolo, gives such an accomplished and natural turn as Michael, the son their mutual father knows about and is raising at an apartment adjacent to Central Park.

Triolo has the moves and poise of a seasoned veteran. His acting is crisp and to the point. His singing and dancing is true and foreshadows what may come if Triolo pursues theater performance as an adult. He is so adept at dance that in an ensemble number at the end of “Elf,” he stands out for the smoothness of his steps and motions.

Expectedly fine performances are given by Kristine Fraelich as Michael’s mother and a welcoming, supporting stepmom to Buddy, and Kate Fahrner as the jaded, no-nonsense New York woman Buddy woos.

Fran Prisco continues his skein of smart, comic performances in a variety of roles. Paul L. Nolan is brusque and bossy as the owner of the publishing firm where Buddy’s father is the chief editor. Charles Pistone offers a neat, funny turn as Buddy’s dad, intent on ignoring his new-found “babe” and taking his time to warm up to the unusual child that claims close kinship to him.

“Elf” is fun, an old-fashioned family entertainment that pretends to no ambition but to please holiday audiences with a smart script and score and lots of season-to-be-jolly heart. Robin brings the show to amiable life. Sutton makes it a perpetual delight, while Pistone, Prisco, and Fahrner provide some texture with their Manhattan ways and toss-off urban quips. Grumps looking for a work of art or grand sophistication may sneer at his good hearted simplicity and surface level of storytelling, but the Walnut cast and crew has “Elf” oiled to be a precision entertainment machine that generates a smile and keeps it planted on your face for the duration.