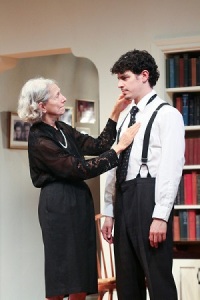 “4000 Miles,” as presented by the Philadelphia Theatre Company at the Suzanne Roberts Theatre, is an easy and comfortable watch. It never bores and always sustains interest. It also never takes off dramatically. For all of the information that is imparted, and all we learn about characters  of whom we become fond, no major conflict, defining event, or searing revelation occurs to give Herzog’s work wings. It flows along, enjoyably, at a steady, accessible pace, gently showing us scenes from the life of a grandson and grandmother who share three weeks together after the young man arrives unexpectedly at the octogenarian’s Manhattan apartment. Incidents or confrontations that might create intense drama — a fatal accident, the young man’s relationship with this mother — happen offstage and are reported rather than enacted. They may elicit empathy or explain why  a character reacts in a particular manner, but they don’t stir the heart or cause deep concern for the long-term welfare of either of the focal figures despite the affection we’ve developed for them. We see the bond between grandmother and grandson stretch and grow, but the progress is gradual and has some effect but doesn’t generate striking impact. Nor do the scenes we witness of the young man’s encounters with women, for one of which he claims to have deep affection. Passages engage us while their played, but the sum of their parts has no building effect. “4000 Miles” doesn’t even achieve what I call the “Driving Miss Daisy” effect, which refers to a play that doesn’t excite much emotion as it unfolds but jolts you into resounding appreciation and admiration as it ends.

Herzog is kind to her characters, even those on the periphery. She gives them a lot of facets and a wide range of feelings to display. She is less fair to her director, in PTC’s case, Mary B. Robinson, because she doesn’t provide enough actual plot or dramatic upheaval. Herzog may bring up a lot of topics, some potentially controversial — politics, attitudes towards the opposite sex, instances of inappropriate behavior, candid admission of unkind thoughts, fecklessness posing as sensitivity — but these arise in passing and have no significant importance in the larger picture. They are mostly red herrings Herzog throws in to disguise how little of major theatrical consequence is being done or said in her play. “4000 Miles” is well structured scene by scene but it lacks a unifying theme, something that will take it past being entertaining to being insightful or engrossing.

Even matters that might concern the audience are not consistent enough to cause deep worry. The grandmother’s forgetfulness, her unsure command of words, and her false accusations of theft or dishonesty are early signs of dementia, but “4000 Miles” never develops that fear. In fact, Vera, the grandmother, believably assures us she will be fine living on her own once Leo, the grandson departs to resume his life in the Western U.S.

About the only progression that evolves and gives some forward motion to “4000 Miles” is Leo using his time at Vera’s to decompress from a traumatic experience and gain some maturity and gumption that propels him further towards responsible adulthood. This growth occurs before the audience’s eyes, and is  a sweet outcome to Leo’s overall situation, but it takes place too slowly and subtly to have a grand dramatic effect or to be regarded as the purpose of the play.

Robinson tries to create dramatic opportunities. She dims the lights to near dark and has Davy Raphaely, as Leo, speak in slow, somber tones as he reveals how his best friend, and companion on a bicycle expedition across the U.S. from Seattle to New York, lost his life. She cues a sound effect that alerts the audience something dire has happened in the apartment adjacent to Vera’s. She directs one of the women who come to the apartment to be larger than life and a big-city contrast to the other, more staid characters. All of this adds to the pleasantness and satisfactory viewing of “4000 Miles” but none of it adds heft or muscle enough to elevate the play, and production, to anything beyond an ably diverting entertainment.

I can go on giving examples of things that allow “4000 Miles” to hold interest but deny it the occasion to soar or put the audience in thrall, but the point is for all of its virtues, the play doesn’t  have the momentum to be more than amiable.

Chief among the PTC production’s virtues is its cast.

Davy Raphaely is all moodiness and natural slouch as Leo. He takes to the “4000 Miles” couch with a book as easily and as freely as if he was about to enjoy a quiet afternoon in his own home.

Raphaely captures the bratty side of Leo. He loves his grandmother, but he can be snide with her in a way one usually reserves for the people he or she cares about most. He can also be defensive, a trait Leo displays when his girlfriend comes to call.

Raphaely’s is a complete, genuine performance that reveals every fiber of Leo’s being, from his independent spirit and warmth to his confusion and poor coping skills. His work helps give “4000 Miles” an arc it may not have had except for the all-out honesty and reality of his portrayal.

Beth Dixon is nicely flinty as Vera. She has her sweet, parental side, but Vera isn’t one to baby anyone or to withhold her opinions or admonitions. Dixon plays her as clear-eyed and independent despite the onset of dementia that rears its dubious head.

Dixon’s voice indicates the strong woman Vera is. She doesn’t coo or talk to Leo as if he was a child or even an adolescent. She expresses herself in deep, full tones that show she is a woman who brooks little nonsense and doesn’t let people delude themselves.

Dixon is excellent at playing Vera’s frustration  when she can’t think of a word or her penchant for pausing then changing the subject of conversation without realizing she’d done it.

Best of all, Dixon can portray affection, and even vulnerability, while maintaining her character’s image of being strong, aware, and indomitable.

Shannon Marie Sullivan exudes the modern woman in love and in scorn as she wrestles with conflicting feelings about Leo. Sullivan is especially good in her final scene when her ambivalence seems to subside, and she indicates she might be open to renewing the couple’s relationship.

Leigha Kato is brashly funny as Amanda, a woman Leo picks up and expects to have sex with. Kato gives costume designer Elizabeth Hope Clancy a chance to be creative, and Clancy comes through with a chic yet loud club outfit, fishnet stockings and all. Kato also moves from frivolous silliness to earnest seriousness with aplomb.

“4000 Miles,” produced by Philadelphia Theatre Company, runs through Sunday. November 10, at the Suzanne Roberts Theatre, Broad and Lombard Streets, in Philadelphia. Showtimes are 6:30 p.m. Tuesday, 7 p.m. Wednesday, 8 p.m. Thursday through Saturday, 1 p.m. Wednesday, 2 p.m. Saturday, and 3 p.m. Sunday. Tickets range from $59 to $46 and can be ordered by calling 215-985-0420 or online at www.philadelphiatheatrecompany.org.