Rush — a movie by Ron Howard 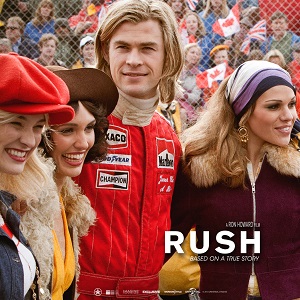 In “Rush,” director Ron Howard avoids many of the pitfalls that limit recent movies. He finds the color and excitement in his subject, car racing. He resists frame after frame of cars maneuvering around a  track and shoots groups of cars at grille or exhaust level, so their mass and potential power create energy and interest. He builds characters and shows you their emotions rather than letting a script narrate something you never see. He can move action forward so that you remain interested in characters and what they’re facing.

The problem for Howard and “Rush” comes when two strong characters, with private and professional lives, face the same challenges over and over again.

With all that happens in the lives of James Hunt and Niki Lauda, rival race car drivers of the 1970s, little varies in how they handle or react to it. “Rush” goes from race to race, injury to injury, and marital dilemma to marital dilemma in a series. By the time you see Hunt and Lauda glaring at each other from their driver’s seats for the third time, the ongoing grudge match between them becomes funny instead of more intense. Scenes of Hunt womanizing or castigating his wife for leaving him Taylor-style to take up the actor, Richard Burton, or of Lauda and his wife looking at each other without smiling or even touching much, convey the same message time and again. We get it, Ron. Change the pattern. Up the ante. For all of its motion, “Rush” stagnates. Here’s a movie in which you care about and enjoy seeing the leads but which always disappoints because Howard could almost take the footage from a previous scene and use it again since what he chooses to show you about Hunt and Lauda, and how it is told, remain so consistent.

“Rush” has  no lift, no forward action. It becomes so regular in its neat and tidy habits that when it moves to something intrinsically dramatic, a drivers’ vote about whether to race in inclement weather or Lauda’s and Hunt’s reaction when a reporter asks a snotty question at a press conference, it has no impact. Even a crisis in Lauda’s life and career, can be watched matter-of-factly with no sense of event or intense concern. If you squirm during one of the hospital scenes, you realize you’re disturbed more by the graphicness of the scene than by honest concern for Lauda.

The audience becomes passive observers. We’d like to be involved. There are small ways in which we are involved, but there isn’t enough in “Rush” to keep the crowd’s adrenaline going. The movie runs out of gas too soon.

The pity is you want to like “Rush” more because Hunt and Lauda have potential to be so interesting. They are both youngest children from wealthy families whose parents refused to back them because they chose sport over finance or project management. They are both fierce competitors who fight for perfection and who enjoy the daring and courage it takes to participate in a contest in which there’s a twenty percent chance you won’t survive the day. They each have their own discipline, Hunt a devil-may-care guy who carries his confidence and nerve with him everywhere he goes, Lauda a thoughtful tactician who trains like an athlete, keeps regular hours, and believes he can outsmart and outmaneuver anyone on the track. Each, particularly Lauda, vows he will join his father and brothers on front pages, only in bigger type with his name in the headline.

These personalities come out clearly in “Rush.” Howard never stints on letting us know about the people we’re watching. It’s only that, after a while, it ceases to make a difference. The interest in the characters is there, but the curiosity about what happens next is gone because it’s going to be more glares and another race much like the last race. Even the outcomes of the contests and the accumulated points to decide a year’s champion cease to matter.

One element in “Rush” is the popularity James Hunt has among other people in the pit while Niki Lauda is so dour and keeps so much to himself, he is not liked in spite of his ongoing success as a racer.

That carries over to the audience. I don’t know why, but I found myself rooting for Hunt as he raced against Lauda. I was happy every time Hunt prevailed.

The curious thing is I rooted quietly. I wasn’t invested in Hunt’s winning, the way I am about the Phillies or the Flyers when they play. I didn’t dig my nails into my palms and bite my lower lip the way I do when I so badly want a home run or a goal. I just sat there hoping Hunt would win and was able to shrug if he didn’t.

Certainly the actors did not keep the movie from generating more interest or excitement.

Chris Hemsworth is all lank swagger as James Hunt. Lovely of face and buddy, Hemsworth’s Hunt personifies the sports hero. In Hemsworth’s hands, Hunt is an easygoing life artist. He can have a swig of wine before entering his car. He can cope with a gear shift that isn’t quite is synch. Life and work are both taken in stride. Hunt will fight for an improvement to his car, and he’ll bruit his skill and courage to anyone who doubts it, but mostly he wants to drink, party, relax, have sex, and on race day, drive.

Hunt doesn’t want pressure or angst, and Hemsworth shows that. From his posture to his shoulder-length hair, the actor exudes cool confidence. He is a man who knows where the treasure is buried, where the elephants lie down, and he can relax and be leisurely in his self-assurance and self-esteem.

Niki Lauda is all intellect and calculation, and Daniel Bruhl does a masterfully understated job of portraying those traits. Niki is  not as good looking as James. When James calls Niki a ‘rat’ because he ran to officials over a minor matter that did not impinge on the outcome of a race, Niki self-consciously says, “You call me a rat because I look like one.” Of course, Hunt responds with, “I call you a rat because you are one.” But you see the contrast. Lauda has bucked teeth and irregular features, but he doesn’t care. He is not in racing to be idolized, although he has his fans. He doesn’t care about the fame or the popularity as much as he cares about excelling at what he’s chosen to do.

Niki goes about his business like a pro and never acts out like Hunt does. Bruhl shows that. We see him holding back the way Niki would.

As Niki’s wife, Marlene, Alexandra Marie Lara is all austere support. She doesn’t like the idea of losing Niki to those 20 percent odds. She is not happy about all of his choices and is concerned when he is in a crash that almost costs his life. Yet the expression on Lara’s face rarely changes. Marlene holds in more than Niki does. One thing Lara’s does convey is that she is a woman in love and one will stand by her husband’s decisions and stay with him even though burns have made him less physically attractive than ever.

Olivia Wilde is decent as the nurse who treats one of Hunt’s wounds in an emergency ward and ends up being Mrs. Hunt. Wilde, though, is the one performer who acts in a movie the whole time she’s on screen. There’s none of Hemsworth’s committed relaxation, Bruhl’s tension, or Lara’s containment. Facially inert though she is, Lara seems natural in her setting. Wilde goes about her business as if she’s doing a job and that’s all. She does look better, by the way, in her natural brunette than she does in this movie as a blonde.

“Rush” would have benefited from more drive and a more creative, or varied way of telling its story. A movie about car racing should make you want to head to Dover Downs the next time there’s a major race. “Rush” is more likely to make you wait to see the next movie that involves racing on DVD rather than going to the theater for it.