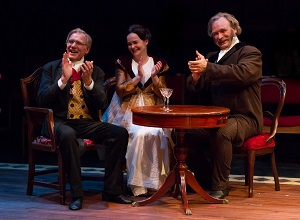 From the moment Peter DeLaurier, as the constantly worried Mr. Woodhouse moans, “How sad,” as he sits at a perfectly felicitous and laudable wedding, you know the Lantern Theater’s production of “Emma” is going to be pleasant and amusing.

DeLaurier, one of the most masterly of veteran actors in the region, will see to it that the show remains entertaining and gets its share of earned laughs. His Mr. Woodhouse, a gentleman who quietly complains about everything and enjoys his hypochondria, is a skillful cross between character and caricature and serves as an artful model for how to milk comedy from a role while staying believably natural. DeLaurier manages this by the cautious urgency with which he delivers his warnings about never opening a window or sitting outdoors for an extended time. His funny but true-to-life performance makes you hope Mr. Woodhouse has at least one cranky outburst per scene. DeLaurier is that entertaining.

Indeed, the Lantern staging of “Emma,” adapted by Michael Bloom from Jane Austen’s 1816 novel, offers much to charm and please. Its running time is almost three hours, but the show is so easy to watch, and so occupying, it never drags. Rather than sneak glances at your watch, you find yourself surprised at the time that has passed.

DeLaurier’s performance is matched by others of similar quality. In fact, the Lantern cast is uniformly good as well as being unanimously attractive. They inhabit their Regency world and Regency ideas with a grace befitting the mores and manners of the period. All speak clearly, all create a defined character (or two), all fit in with Ms. Austen’s intentions, and all keep the proceedings running smartly and efficiently as Emma’s story, about a spoiled young woman who, having been successful once, attempts to manipulate the romantic lives of all of her entire acquaintance, dances forth lightly and airily.

The production is like a good custard, neat and sweet, and while it makes for a congenial diversion and takes great care to include all of Austen’s high points (even those it alters, e.g. the disposition of Emma’s painting of Miss Smith), it remains curiously level, like a train going at one speed on a straightaway, when it would be better if it soared at times and better yet if it delved more deeply into emotion and gave the characters more chance to express themselves in action and gesture, as DeLaurier’s Mr. Woodhouse does.

Director Kathryn MacMillan has her cast keep a lively and comfortable pace. The performance proceeds like an amiable gavotte, but MacMillan lets Bloom’s and Austen’s words communicate all instead of having the actors create dramatic tension or more palpably demonstrate the onset and effect of affection or intimacy called for in a story that leads to everyone finding a mate and marrying.

The lack of intensity doesn’t mar the production. It is too delightfully crisp and verbally sharp to be disliked. It’s more a matter of the action on stage remaining matter-of-fact and emotionally static, sterile perhaps, even as MacMillan and company relate Austen’s story brightly.

That story remains clear and concise throughout, perhaps MacMillan’s primary intention to keep the audience on track with all that occurs, but it doesn’t move you or make you feel anything in particular for any character or situation.

I take that back. There is one instance when Emma forgets herself and publicly says something snide about a friend who does not have the defenses to bear it well. As played by Charlotte Northeast, that moment makes you empathetic towards the insulted character, Northeast feigning indifference and even grinning acceptance before she walks off looking as if she is about to burst into tears.

That instance stands out because it stands alone. The expressions the actors held when they were not focal in a scene were often more telling than the pert efficiency with which they conducted themselves when they were stage center. Northeast, in two distinct characterizations, continues to act her parts when she has few lines and is off in a corner. Lee Minora, who plays Jane Fairfax, is also deft at maintaining her character’s attitude and personality when she is listening. In the throes of a scene, they, like all of the cast, communicate Austen’s tale admirably but without offering the audience much chance to get involved beyond intellectual appreciation and, once again, pleasant amusement.

The actor who brings the most fire to the proceedings and manages to turn liveliness into excitement at times is Jake Blouch as Frank Churchill, a character that is called on to be a little more flamboyant and less courtly than the other men. Blouch brings energy to the stage that leavens the general evenness of the production.

As I’ve said, no one in the cast hits a false note or is anything but likable and charming. I thoroughly enjoyed “Emma” and believe it captures the tone of both Austen and comedy of manners, but I would have liked to have seen more texture and to have had more invitation to care about and react to what happens, rather than  being so smoothly at ease throughout. I felt as if I was being told a story, a good, interesting story related by entertaining readers, but that “Emma” never emerged past being an acted out book. It never quite felt like a play.

Lauren Sowa sets the bright, intelligent tone as Emma. She moves and talks with assurance and is ready to stand her ground with civility and poise when anyone disagrees or quarrels with her. Sowa is right not to let you see Emma scheming or manipulating, but she may have been better advised to use looks and facial expression more than words to convey when Emma is attracted or even smitten. Sowa speaks her lines wittily and finds the Austen bite, as well as Emma’s certainty of tone, but the performance, like most of the play, stays vocal and never gets deep or visceral.

Harry Smith is a gallant George Knightley, more amused than haughty or nonplussed by Emma’s meddling or by her sometimes-wrong- but- never-in- doubt surmises and assertions. Smith will let you see what Knightley is thinking. His character is an observer who often holds his counsel with everyone but Emma, who he feels a need to challenge and instruct. Smith will meet Austen again this year. He is cast in the People’s Light & Theatre Company’s production of “Pride and Prejudice.”

Charlotte Northeast is a delight in both of her characters. She is all sense and reasonableness as Emma’s former governess, the one who was married at the wedding Mr. Woodhouse pronounced ‘sad.’

Northeast shows the ease of familiarity than comes with having lived so long as Emma’s friend and companion. As Miss Bates, she is properly sweet and silly. She could, however, give up a mincing walk that seems a little too exaggerated for the character, a walk that seems more antic than comic.

Jake Blouch has bluster and bonhomie as Frank Churchill, the edgiest of Austen’s characters who, in Bloom’s script, does not come off as false or rascally as the denizens of Highbury, the town 21 miles from London in which “Emma” is set, say he is. As Robert Martin, Blouch is appropriately stolid.

Trevor William Fayle captures the easy friendliness of the vicar, Mr. Elton. Fayle is another who cues some of what he is feeling in keeping with Austen’s story.

Nathan Foley is the picture of the contented country gentleman as Mr. Weston. Lee Minora is aptly shy and humble as Jane Fairfax, even when she is being praised for displaying talents that make Emma jealous. Angela Smith plays Harriet Smith on the gawky side while reserving a high-hatted tone as the critical Mrs. Elton.

MacMillan’s notes say she asked for a bright set, and Dirk Durossette obliged with a Surrey village and countryside that is all sunlight and populated by comfortable people with comfortable homes. It is remarkable how many arrangements Durossette  finds for the furniture that, in one combination or another, decorates every home in Highbury. Alisa Sickora Kleckner’s costumes are appropriate to the time. The gown she designed for Sowa’s Emma are particularly attractive. The sunlight MacMillan ordered is supplied amply and joyfully by Shelley Hicklin’s lighting design.

This entry was posted on September 28, 2013 by nzoren in Theater Reviews and tagged Emma, Jane Austen, Lantern, Regency, Theater.