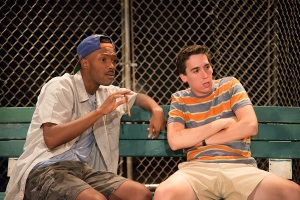 Brandon Pierce is a chameleon. With the speed of a Wayans and the effortless versatility of Eddie Murphy, he can turn in a tick from being friendly to frightful, prickly to vulnerable, teasing to menacing, and comic to deadly serious. Each of Pierce’s personae are convincing, and each adds to the tension and constantly impending sense of danger that pervades Kevin Glaccum’s taut, engrossing production of Greg Keller’s play, Dutch Masters, for Azuka Theatre.

Pierce plays a young man who jaws with his buddies, the “n” word and joyful boasts about fights and crimes dominating his patter, as they take a northbound “D” train through midtown Manhattan towards Harlem and the Bronx circa 1992, two  years before Rudy Giuliani lowered NYC’s crime rate and long ahead of the current gentrification that has set in above 110th Street. When his cronies depart, Pierce’s character, Eric, sees another young man, this one heading to Riverdale, a white enclave in the Bronx, and decides to get his attention in a Zoo Story meets Dutchman-like way, by insisting on it. Dutch Masters derives its name from Amiri Baraka’s classic drama from the 1960s,and Eric’s engagement of the other young man, Steve, reminds one of the fatal encounter in that play. Steve tries to ignore Eric by burying his nose in a book, but Pierce, using elbows and “come on, you know you notice me” antics persists until the two guys engage in conversation.

In spite of his character being more contained, and usually more self-controlled, Brendan Dalton is as effective and affecting as his castmate.  Steve may have a more consistent personality and less range than the mercurial, restless Eric, but Dalton fleshes out Steve’s various reactions to Eric with fidgets, feints, and flashes of comfort and confidence that make Keller’s parry a suspenseful two-man bout that keeps the Azuka audience on edge wondering where the meeting of the characters will lead. Glaccum’s staging is often the most unsettling when the two characters are in a state of relative contentment or relaxing in each other’s presence. Somehow you know that level of peace and understanding will not last, and you wait anxiously for the next outburst by Eric or misstep by Steve. Pierce and Dalton are in tune with each other, acting in rhythm while keeping their characters’ time together fraught with enough potential peril to be unnerving to both the characters and the audience. The introduction of a gun raises the stakes and adds a deeper tone of doom and dread to the already intense proceedings.

Dutch Masters is about more than race, prejudice, and stereotypes. Both Steve and Eric are at an age when they are forming and their identities and posturing as they attempt to determine where they fit in a wider world. Although it looks as if Eric has coerced Steve to remain with him once the “D” has passed the safe harbor of 59th Street, Dalton’s expressions reveal that Steve makes a conscious choice to have an adventure, partially because he wants to acquire, or even pretend he has, the easy “got your back” cool Eric exudes, and partially because he is young enough that he doesn’t want to look like a wuss or a racist when Eric proposes they hang out and get high together. Eric may be overbearing, and he obviously enjoys keeping Steve guessing about whether he is friend or foe, but, based on Dalton’s acting choices (or Glaccum’s direction), Steve is as much a volunteer for a walk on a wilder boulevard as he is a pawn in Eric’s badgering agenda. Keller throws in another layer of texture when we learn Eric and Steve have something important in common and may have even met prior to their subway episode.

For those curious about whether Dutch Masters has anything to do with cigars, the answer is yes. Eric uses the tar paper from cigarette-sized Dutch Masters products to roll his potent joints. Pierce and Dalton have a mutually deft scene that shows just how potent Eric’s “smokes” are.

Dutch Masters runs through Sunday, September 29 at the Off-Broad Street Theatre, downstairs at the First Baptist Church, at 1636 Sansom Street in Philadelphia. Showtimes are 6:30 p.m. Wednesday, 8 p.m. Thursday through Saturday, and 2 p.m. Sunday. Tickets are $25 with discounts for seniors, students, and artists and can be ordered by calling 215-563-1100 or going online to www.azukatheatre.org.

Photos are by Johanna Austin, www.AustinArt.org