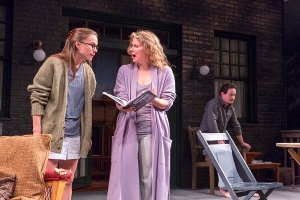 I get excited by titles, especially economical one-word titles, that have multiple meanings, as the title of David Auburn’s humorous, moving, and multi-faceted play, Proof, does.

Most literally, Proof refers to the solving of a mathematical theorem, the solution of which one Auburn character says is “historic.” As the play unfolds with sharp, textured line delivery and honest emotion at Princeton’s McCarter Theatre, other legitimate interpretations come to mind — proof of authorship, proof of talent, proof of sanity, proof of individuality, and the proof of ability a college degree does or does not confer.

Auburn explores all of these in efficient, entertaining fashion. He writes interesting conversations, the kind you wish you could join, while having a flawless knack for knowing when to stop the amiable and engaging chit-chat that acquaints us with characters and situations and drop the revelatory salvos that give Proof the dramatic heft that earned it the Tony Award for Best Drama of 2001 ahead of Tom Stoppard’s The Invention of Love. Auburn covers a lot of territory, and he manages to weave each thread completely while never losing sight of his central plot or his primary character.

All of Auburn’s gifts are amplified in Emily Mann’s remarkably fluid and moving production at McCarter. If Auburn addresses a subject, Mann, as Proof’s director, finds a way to give it substance and importance that maximizes each idea while never letting one tangent dominate over another. The result is an organic production that allows fully created characters to live their lives quite naturally on stage, unveiling the key points when the time comes as a matter of fact or as part of the integral course of  conversation. Nothing has to be pushed or exaggerated.  Everything that is said or happens on the McCarter stage is true to life, even a scene you learn is a fantasy. You may ask if that isn’t the way all plays and productions should work. The answer is ‘yes’ to the ‘should’ but ‘no’ to the reality of most theatrical situations. The excellence in Mann’s production is she has presented Auburn’s play with admirable thoroughness while never letting you see the craft with which she did it.  In short, she made the entire McCarter production of Proof greater than the sum of its prodigious parts.

Proof is set on the backyard deck of an old, rambly house near the campus of the University of Chicago on that city’s far South Side. It has been the home of Robert, a renowned mathematician who, by age 24, achieved significant breakthroughs that outpaced colleagues of his era and continue to cause awe among contemporary maths students. For the last years of his life Robert suffered from advanced dementia. During this time he was cared for by his younger daughter, Catherine, who dropped out of school and put her life on hold to make sure her father was safe and happy in his own home. Catherine is the focal character of Auburn’s play. We meet her at the time she is awaiting the arrival of her sister, Claire, a successful New York currency analyst, with whom she is preparing for her father’s funeral.

Also in the house is a Chicago grad student, Hal,  who has been dispatched to look at more than 100 notebooks Robert left behind to see if they contain anything important mathematically. Hal adored Robert, his doctoral advisor during a brief time Robert enjoyed a remission from his dementia. He also admires Catherine, who he remembers from a meeting four years earlier and who has attracted him once again.

Catherine is not particularly interested in being attracted. She has gotten accustomed to her hermit’s life and prefers to traipse around the now, but for her, empty family house in oversized sweaters and jeans, her hair combed only if she happens to run her fingers through it. Hal, as a mathematician, knows the importance of “try try again” and keeps up his campaign to get Catherine to notice it.

Auburn provides Proof  with a lot of angles. Robert’s mental condition is one. As someone who has just ended several years of caring for a father with profound dementia (and I mean ‘profound’ is all definitions of the word), I can vouch that Auburn is familiar with the subject and handles it with sensitivity that doesn’t flinch from reality. Catherine’s situation is another plight Auburn obviously understands. She has no training or income, and Claire thinks she knows better than Catherine about everything. She even decides Catherine should have cream in her coffee after Catherine tells her she prefers coffee black. “I think you should have cream,” Claire says. Under Claire’s watch, the house in South Chicago could be sold. Claire believes Catherine would be better off living in New York with her and her well-connected fiance, Mitch.

Then, there’s Hal, an employee of the University and looking out for its interests but truly enamored by Catherine, who makes even a greater impression when he sees her in a classic “little black dress” Claire provided for her to wear at their father’s funeral and a reception afterwards.

Auburn sets several plot lines at work, but the one that matters most is Hal’s discovery, after being led to it by a romantic Catherine suddenly as much taken with Hal as he with her, of a groundbreaking proof among the papers in Robert’s office. This is the catalyst that brings all other stories to a neat and significant point.

With all of subjects and themes Auburn so competently addresses, the one that stands out is estimation. Characters, particularly Catherine, are clearly overestimated or underestimated, with underestimation taking the foreground. Auburn brings so many things into play that he can reveal the judgments and prejudices people have when looking only at the surface of a situation. He questions why no one has the patience or takes the time to ignore circumstantial evidence and look for proof.

Catherine is underestimated because she is a woman. She relates to Hal the story of Sophie Germain, a 19th century maths genius who had to present her postulations and proofs by mail using a male pseudonym because no self-respecting scholar would pay attention to her original, liberating work on prime numbers if she revealed herself as a woman. (Luckily for Sophie, when her identity was learned, Joseph Louis Lagrange, the don who received her work, pronounced that only the math counted and granted Sophie her due.)

Catherine is underestimated because she has  no college degree, having left Northwestern in her sophomore year to tend to Robert. Universities, after all, frown on people, capable or not, who excel in their fields without taking the time or interest to buy higher education’s product.

Catherine is underestimated because she is a virtual recluse who bathes but does little else to enhance her appearance or even look the best she can to the wider world.

The ultimate problem is who knows best, the hapless, uneducated Catherine, whose main exposure to maths was her father’s work and the books in his library; the assured, overachieving Claire, who brings New York style and a strong sense of authority to her equation; or Hal, who believes he alone, as a Ph.D. in mathematics, realizes the treasure contained in that one lucidly written “historic” notebook from Robert’s study.  That is the crux of Auburn’s play, the engine that drives all other elements. Thank goodness for this theme, and those elements. They provide an engrossing and satisfying occasion of theater, one enhanced by Emily Mann’s encompassing production and eye for nuance.

I have seen Proof at least eight times, and McCarter’s mounting is the best I’ve attended, including the original Broadway staging. Besides presenting Auburn’s main ideas in a cogent, engaging way, Mann pays attention to little things that make the characters and their circumstances more than figures in a fictional story.

Mann’s cast can take some credit for these small but enriching touches. Michael  Braun, as Hal, takes the slightest of pauses as he relates what mathematicians do at conferences and conventions, and he earns an extra laugh that gives the production sparkle and Auburn’s wit a chance to score. Kristen Bush, as Catherine, bubbles as she makes two major decisions about her relationship with Hal. A little dance she does as she stands in her little black dress and extends a hand to Hal is comic and lovely at the same time. Her expression and her anticipation when she directs Hal to the major mathematical find is extraordinary. They tell you exactly who Catherine is and how cautious, free, impulsive, and vulnerable she can be in turn. Jessica Dickey’s timing as Claire pours that cream in Catherine’s coffee, and the way she conveys Claire’s struggle as she broaches delicate subjects, are two among several bits of acting that seem more natural than scripted. The reliable character actor, Michael Siberry, hits the right notes of crustiness and affection as Robert. The scene in which he and Catherine realize mutually that his remission may have ended, is, like much in Mann’s production, affecting in multiple ways.

Bush makes Catherine a total person. You see her in her glory and at less flattering moments.  Bush gives a fearless  and versatile performance that anchors the play and the production. She is obviously an actress who immerses herself in her roles. She stays in character even during curtain calls.

Eugene Lee’s clever set also adds to the setting. When the play is in progress, Stephen Strawbridge’s lights focus on the deck and back door of Robert’s house. As the audience takes its seats and at intermission, they see Lee has surrounded the house with blackboard filled with equations. The chalk figures, including diagrams, speak volumes and witty set up the proceedings Auburn and Mann have in store. Jennifer van Mayrhauser’s costumes are so authentic, you’d think the characters showed up in their own clothing.

This entry was posted on September 15, 2013 by nzoren in Theater Reviews.